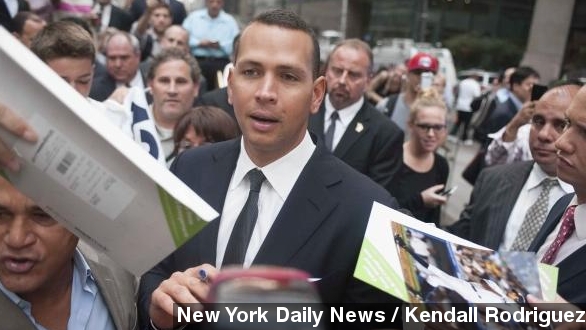 Rodriguez's simultaneous release of a statement as he stormed out of arbitration over steroids had some media outlets wondering if it was planned.

The Yankeeless Major League Baseball playoffs ended less than a month ago, but don't worry. A-Rod still has plenty of New York drama for us.

During an arbitration hearing where the MLB accuses the Yankee slugger of using steroids, Alex Rodriguez reportedly slammed his hand on the table and yelled at baseball's COO, "You know you're full of s***!" (Via The Washington Post)

The outburst happened when the arbitrator didn't force Commissioner Bud Selig to testify. No doubt, A-Rod couldn't have been happy about that, but was his court-room anger legit?

The New York Daily News pointed out A-Rod's spokesman simultaneously released a long statement as he walked out of league headquarters.

In part, it reads, ​"I am disgusted with this abusive process, designed to ensure that the player fails." It also says Rodriguez won't participate in a farce.

"I think this seems kind of planned. I mean, they had a feeling — A-Rod's side — that the commissioner was not going to have to testify. There's some high-priced lawyers here, so I don't think any of this stuff is off the cuff." (Via ESPN)

Rodriguez is appealing a 211-game suspension that would likely all but send the 38-year-old superstar into retirement and leave him without the tens of millions of dollars remaining on his Yankees contract. (Via Fox News)

Biogenesis' owner, Tony Bosch, is one of the witnesses against Rodriguez, and eight other players accepted shorter suspensions linked to the clinic this summer. (Via MLB)

These hearings were part of a grievance filed by baseball's players union. Walking out may force A-Rod's case into federal court.