A Judge Ruled Abortion Clinics In Louisiana Can Continue Operating 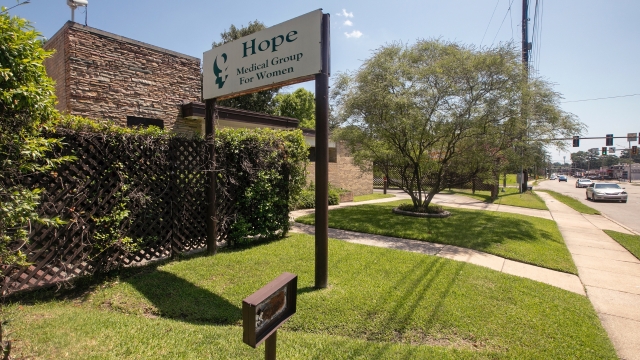 A clinic sued the state; and for the second time a Louisiana judge blocked the trigger law from taking effect, but no one knows for how long.

A new ruling released Thursday, will allow clinics in Louisiana to continue providing abortions while lawsuits challenging the state's near total ban are resolved. Earlier this week, a group of protesters chanted against anti-abortion rights laws outside a Baton Rouge district court; "Not the church not the state, women will decide our fate."  Inside, a judge considers what to do about a Louisiana trigger law that's triggering emotions statewide. Kellyann Bates participated in the abortion rights protest. "There's just so many things that are frustrating right now, that I feel are really out of my control but if we come together, we can change things," Bates said. Protesters armed with microphones and speakers outside that court nearly drowned out the state's Attorney General, Jeff Laundry during a press conference.  "Those people that don't like it have two choices; they can go and try to change the law, but if they find themselves in the minority of ideas, they can pack their bags and go somewhere else,"    When the Supreme Court struck down Roe versus Wade in June, it was left for states to decide on abortion laws. In Louisiana, trigger laws were set to immediately ban most abortions.  But a Shreveport clinic sued the state; and for the second time a Louisiana judge blocked the trigger law from taking effect, but no one knows for how long. Louisiana's Right to Life is one of many groups watching this case closely at the state's capitol. Sarah Zagorski is Louisiana's Right to Life communications director. "Louisiana's overwhelmingly pro-life and that was a no right to abortion can be found in our state constitution," Zagorski said. "I mean, I think this is just a delaying tactic by the abortion proponents, specifically hope medical group, to just continue abortion as long as they can with this TRO (temporary restraining order)," she continued. That state judge hasn't removed it.  The clinic that started the lawsuit says there are so many abortion laws that its confusing what restrictions and penalties are in place. State Representative Mandie Landry is a big supporter of women's rights.  "Overzealous legislators, they all have to have their name on some anti-abortion legislation," Landry said.She notes that lawmakers wrote bills in ways that make it hard to understand what law supersedes the next.  "And what happened was so many of them have done that over the years, that so many of the laws they wrote conflict because the Louisiana legislature isn't necessarily known for being accurate all the time," she continued.