Thousands Of NYC Workers On Unpaid Leave Over Vaccine Mandate 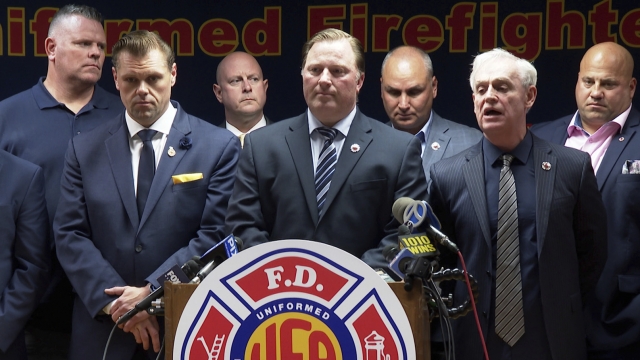 Mandate opponents demonstrated in Staten Island Monday night, and thousands of firefighters called out sick in an apparent protest of the requirement.

About 9,000 New York City municipal workers were put on unpaid leave for refusing to comply with a COVID-19 vaccine mandate that took effect Monday.

New York City's largest police union said getting vaccinated is a "personal medical decision" that should be made in consultation with a doctor.

Mayor Bill de Blasio said about 9 in 10 city workers covered by the mandate have been vaccinated and there have been no disruptions to city services as a result of staffing shortages. New York has more than 300,000 city employees.

Coronavirus vaccine mandate opponents demonstrated in New York City's Staten Island on Monday night, and thousands of city firefighters called in sick in an apparent protest over the requirement.

Fire Commissioner Daniel Nigro said firehouses remained open but 18 of the department's 350 units were out of service and "many units are understaffed."

The head of the firefighters union says the mandates aren't needed at all since New York's COVID numbers have been steadily falling for weeks.

About 12,000 city workers applied for religious or medical exemptions from getting vaccinated. Those workers will be allowed to stay on the job while their applications are being reviewed.