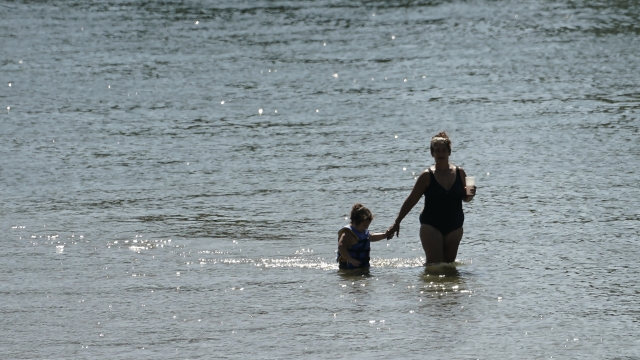 Many Americans are under a heat alert, as temperatures reach triple digits in many cities.

A punishing heat wave is melting huge swaths of the U.S.

"Miserably hot. But, I thought I had at least a day in me, I don't know if I'll make it tonight," said Darlene Hudson, a resident without power in Arkansas.

About a third of Americans are under some type of heat alert.

In some regions, as days sizzle, people are still waiting to see relief in the forecast.

"This is our 40th day in a row with temperatures over 100 degrees. You know, summer will be hot in Texas, but this is unlike anything that I've seen," said Austin Mayor Steve Adler.

Cities such as Las Vegas, Phoenix, and Dallas are all seeing triple-digit highs straight through their 10-day forecasts — as the northeast prepares for a muggy weekend, and the Midwest and plains muddle through torturous power-outages.

"At nighttime, we can sleep in there until we can't breathe anymore. And then we have to go outside," said Kayla Grimes, a resident, waiting for her power to be restored.

Kurtis Vosquez is the general manager of Smiley's Heating and Cooling.

Overseas, the heat is compounding fires in London.

Prince Charles made a plea for change.

"As I've tried to indicate for quite some time, the climate crisis really is a genuine emergency, and tackling it is utterly essential for Cornwall, the country and the rest of the world," Prince Charles said.

"In the coming days, my administration will announce the executive actions we have developed to combat this emergency. We need to act," President Biden said.

His plan includes billions to retrofit buildings in preparation for climate disasters, like flooding.

The heat offers a startling reminder for many of the power in weather extremes, the kind of extremes we need to be ready for much more of in the years and decades to come.

"The President isn't going to take no for an answer when it comes to climate action. This is an emergency, and he's going to treat it as such," said Gina McCarthy, The White House's national climate adviser.