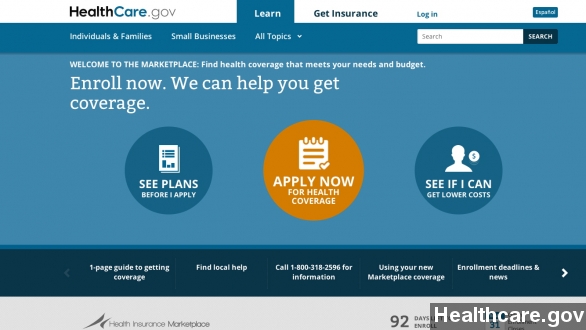 More than 1.1 million people have successfully enrolled under the Affordable Care Act through Healthcare.gov, according to the Obama administration.

More than one million people have successfully enrolled in the Affordable Care Act through Healthcare.gov. But what that one million landmark means — depends on who you ask.

Neera Tanden: "We have a million people from the ACA getting coverage... We have a 7 million target, if we go on the same trajectory as Massachusetts then we will hit those numbers."  (Via CNN)

And there you have two fairly different interpretations: From Fox News, a "not as much as it should be" takeaway — and from CNN — "Hey, it's getting better."

And technically it is. In October, only 27,000 people were able to successfully sign up for the law online. (Via WATE)

In the four days leading up to December 24th, Centers for Medicaid and Medicare Services, or CMS, says response times averaged just half a second and error rates were less than one percent.

CMS announced that more than 975,000 people signed up in the month of December, with 83,000 users enrolling in the program on December 23rd alone. (Via The Hill)

The 23rd was the first coverage deadline for the law, but due to the heavy surge of visitors on the site the administration extended it another day. (Via KNXV)

But The Wire's Connor Simpson writes “the odds of this going smoothly are slim.” A late enrollment surge could pose a problem in terms of properly setting up 1.1 million people to begin their coverage by January 1st.

CBS interviewed one woman who signed up before the deadline, but hadn't gotten a notice confirming her enrollment had been successful.

“What if a need comes up? What if January 2nd I have an injury and I have to go to a hospital? They’re gonna ask for insurance verification and I don’t have anything to give them.” (Via CBS)

The administration has yet to release numbers for the 14 states that have set up their own exchanges. (Via USA Today)

Prior to the rollout, the original goal was to have seven million people enrolled by the end of March. While the first coverage deadline has already passed, open enrollment for the exchanges won’t end until March 31st for those trying to avoid the fine for not having coverage.