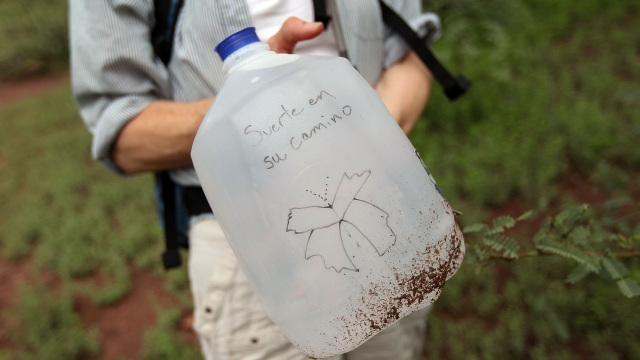 The federal felony case in Arizona against Scott Warren is bringing an outcry from migrant support groups.

Scott Warren says he was acting on his religious beliefs when he provided food, water and shelter for two migrants crossing the harsh Arizona desert.

The United States government says he was illegally conspiring to transport and harbor illegal immigrants.

Now a trial begins in Tucson this week, stemming from this January 2018 raid by Border Patrol officers on a remote clinic operated by a humanitarian group called No More Deaths.

Warren is a volunteer for the group when he's not working as a college geography instructor. A media campaign by migrant-support organizations depicts him as a martyr for compassion.

They argue his prosecution represents a shift in government attitudes toward humanitarian groups leaving water in Arizona's Sonora desert to help illegal crossers survive the journey.

They point to these clips, shot by No More Deaths, of Border Patrol Officers draining the water supples and boasting about it.

"Look at this trash somebody left on the trail. It's not yours, is it? All you have to do is tell me: Is it yours? Not yours? You're not going to tell me, huh?"

In this criminal complaint, the government says Warren aided two illegal crossers, providing three days of shelter, food, water, beds and clean clothes at a No More Deaths desert clinic called "the Barn." He faces felony counts that carry a maximum of 20 years in prison.

In court, Warren argued his religious beliefs direct him to help people in need. But prosecutors argued that the migrants he helped weren't in distress and his faith didn't compel him to "aid in the evasion of law enforcement."

Humane Borders is an activist group that manages desert water stations and also tracks migrant death statistics. It says over 3,300 people died crossing the Arizona desert between 1999 and 2018, marked by the red dots you see here.

In an Op-Ed this week in The Washington Post, Warren said he used to have warm exchanges with Border Patrol agents, who had no problem with him leaving water. Now he says his trial raises questions whether "the government will take seriously its humanitarian obligations to the migrants."

He ended the article by saying "If they are thirsty, we will offer them water."