Activists Call For Internet Balloons In Cuba Amid Protests 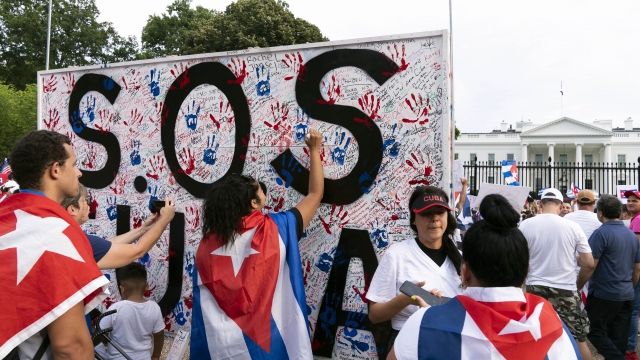 Several lawmakers are trying to come up with ideas, like using high-altitude balloons, to provide internet access to the people on the island.

These balloons could help millions of people in Cuba get the word out about what's really happening in their country.

The Cuban regime blocks and censors internet access, as alleged crimes against humanity are committed.

The balloons created by the Google service "Loon" could float at altitudes of up to 75,000 feet.

The advanced technology could be located about 20 miles from Cuba in international waters.

"If the country below us, which is Cuba controls all of the spectrums we have to find out which spectrum is available that we can use and then there’s a high probability that they would probably jam that signal in the spectrum," Hiram Del Amo said.

Instead, Del Amo says the U.S. could consider broadcasting internet from its military base in Guantanamo Bay.

"This base could be used as a rely to that base and that base could distribute throughout the island. It would not go too far but at least I would cover a good ground," Del Amo said.

Another option is the United States embassy in Havana.

The signal could be transmitted from there, but it wouldn't reach the 11 million people in Cuba.

Several legislators in Washington are pushing the federal government to take action.

"We need the political willingness from the Biden administration and if the federal government considers that they cannot pay for the resources, the Cuban-American community will, I am sure that they will create an escrow, somebody that will know exactly where the money is going to," Republican Rep. Maria Elvira Salazar said.

These plans would likely have to include the department of defense, the federal aviation administration and President Biden's direct authorization.

The Cuban influencers who organized a rally in front of the White House over the weekend are demanding a meeting with President Biden.

"We're making sure the federal government; the Biden administration knows that's going on in our country so they can help us. Because the only person that can help the Cuban people is President Biden," Alex Gonzalez said.