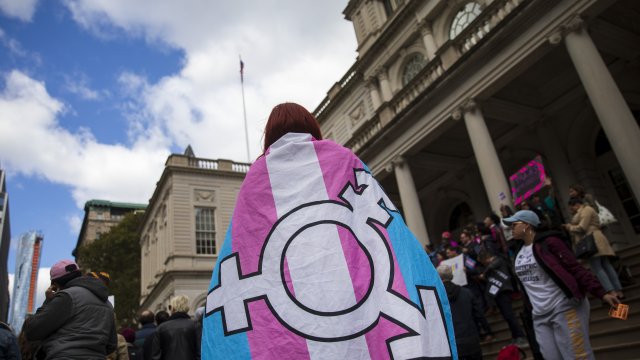 The push for protections is made easier with the Marsha P. Johnson Institute's Safety and Wellness Act.

“Black trans women are being killed in this country and CNN you have erased black trans women for the last time,” Blossom C. Brown said. A woman hands a microphone to another, presenting an opportunity to elevate an issue often dismissed.

At least 22 transgender or gender non conforming people have been killed in 2019. The majority were black trans women, according to the Human Rights Campaign. Women like 24-year-old Zoe Spears, who dreamed of becoming a lawyer. 22-year-old Bee Love Slater, who called herself ‘a brown-skinned baddie.’ Or 32-year-old Dana Martin, whose loved ones described her as “a quiet storm of a woman.”

It was these women and the soul of one other who ignited this moment.

“Something just came in my spirit. I don’t know if it was Marsha P. Johnson herself, but I got up and I just went to the mic, she gave me the mic, and I just started making my plea to the nation about the murders of black trans women,” Brown said.

“Marsha P. Johnson is the Rosa Parks of the gay rights movement."

A key figure of the Stonewall uprising-- a symbol for the modern-era LGBTQ rights movement. Marsha P. Johnson died hours after a Pride Parade in 1992. Officials said she died by suicide. Johnson’s friends and community members dispute her cause of death.

That legacy coming into fruition again with the Marsha P. Johnson Safety and Wellness Act. It’s a model for policies, legislation and laws that prioritize not only the safety and wellness of black trans womens’ lives, but also their communities.

"And so the goal for us was to really introduce this in a way that was very similar to the Violence Against Women Act,” Hearns said. “In order for the murders of black trans women to stop, then the conditions of black communities have to improve. The reality is that when you have less to people without nothing poverty will inform who gets to live and who gets to die. And unfortunately, for black trans women, we are typically at the end of the poverty line."

The act... serves as a blueprint to direct resources toward housing… and job opportunities among other things… like decriminalization of what Brown says no one wants to talk about, sex work.

The goal is to interrupt the violence before it ends in murder. It’s these structural changes Blossom saw missing from the dialogue at the CNN town hall. And why when Don Lemon said "That’s why we’re here. To validate people like you.”

Brown said, "Your actions have to speak louder than words."

"Accountability, not only is a gift, it is the greatest form of security that we can offer people who are completely susceptible to being on the receiving end of violence and community but also structurally in our landscape," Hearns said. "And so, as it relates to public officials, I think there is a great responsibility to be clear about what side you’re on. Either you believe in the humanity of all people, or you only believe in humanity of a certain kind of people.”

But Hearns is clear on what responsibility looks like. "You know, we’re not calling on anyone to be our savior. We truly believe that survivors have the answers,” Hearns said. Implement policies written by directly-impacted communities, like those in the Marsha P. Johnson Safety and Wellness Act. And when moments like Brown’s present themselves… just pass the mic.