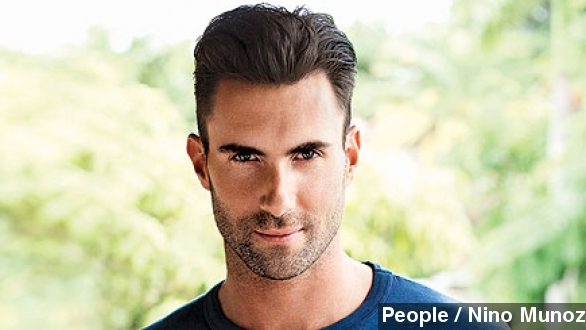 The lead singer of Maroon 5 and coach on 'The Voice' has been given the annual honor. Do you agree with People's choice?

Well, if a rock star isn't sexy, what is?

The 34-year-old singer is dubbed "cool, confident and seductive" on the issue's cover. (Via People Magazine)

Of course, the issue will reveal all the sexy details, but a preview reveals Levine keeps his body so sexy through yoga and spinning. He says he "loves to be naked," and is looking forward to marrying his supermodel fiancee Behati Prinsloo. (Via A&M Octone Records / Maroon5VEVO) (ABC / "JIMMY KIMMEL LIVE")

The rock star and supermodel.  Doesn't really get any sexier than that. The "Sexiest Man Alive" is usually chosen at a major career moment, and Levine's definitely having one.

While he still records with Maroon 5, he also judges on NBC's hit singing competition, "The Voice." He'll hit the big screen in his first feature role soon, and he's also launching a men's clothing line.

And the issue will feature other sexy men too — including Luke Bryan, Bruno Mars, Jimmy Fallon, Pharell Williams and more. But, what do you think of People's choice for this year's Sexiest Man? Tweet us @NewsyVideos and let us know.