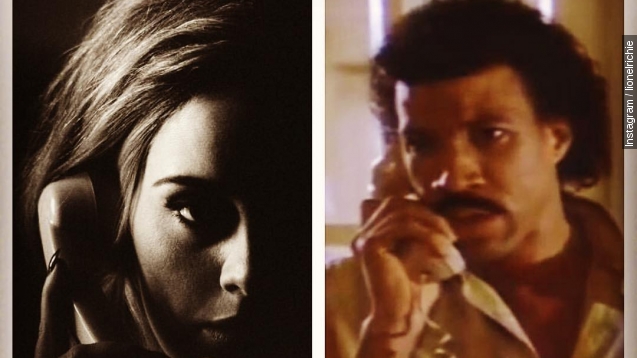 If you cry when you watch this video, those are tears of laughter.

When Adele dropped her newest single, "Hello," at the end of October, the emotionally debilitating lyrics wrecked the entire world. And the music video, equipped with flip phones, dialogue and a British telephone booth inspired a considerable amount of parody videos.

This mashup of Adele and Lionel Richie's song — which is also called "Hello" — went viral.

And there was Billy Eichner and James Corden's Halloween "Hello" parody, which featured the two comedians dressed as Han Solo and Chewbacca trying their darndest to hit the high notes of Adele's song.

Of course, it's also become the go-to for some hilarious YouTube parodies, like this one from MyLifeSuckers. The lyrics were changed to reflect a mother's busy life at home. (Video via YouTube / MyLifeSuckers)

But maybe the funniest "Hello" adaptation came from the queen of talk shows, Ellen DeGeneres. (Video via Columbia Records / Adele)

"What yes can you hear me?," DeGeneres asks.

Ellen explains that Adele's song is actually based on a conversation the two celebs had — basically Adele is talking in circles and Ellen can't keep up. We all have that friend.

"Seriously, speed it up. I'm kind of in a hurry. Just get to the point," DeGeneres says.

Oh, Ellen. You slay every parody you make. Remember this one?