Migrant Families Reunite After Years Apart: 'It Feels Like A Dream' 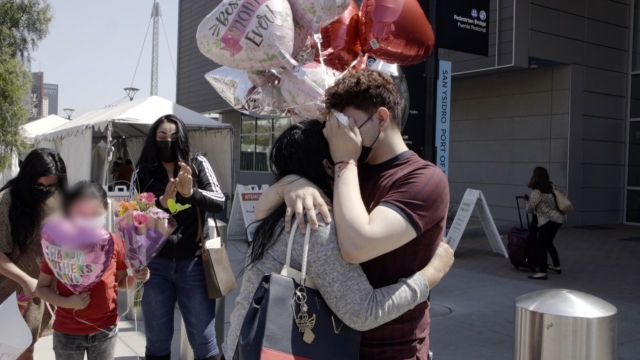 The Biden administration has begun reuniting the more than 1,000 migrant families who are still separated due to a Trump-era policy.

This is the moment Sandra Ortiz sees her son Bryan in person for the first time in more than three years.

Theirs is one of thousands of families who were separated under a Trump administration policy meant to deter illegal border crossings.

"It feels like a dream, like I was just in the car and I was like, this is finally happening," said Bryan Chavez, the 18-year-old who was separated from his mother.

Later that night, Keldy Mabel Gonzáles, a mother from Honduras, surprised her sons, Mino and Erick, at a family gathering.

The families are among the first to be reunited by organizations working with the Biden administration. The videos were taken by advocates and immigration lawyers who helped organize the reunions.

They've been tracking down the hundreds of parents — the majority of them living in Mexico and Central America — in the years after the family separations took place.

The Biden White House says the Trump administration left it with little to no information about the families.

"We are addressing the many, many more families that need to be reunified," said Homeland Security Secretary Alejandro Mayorkas earlier this week.

Other challenges include parents living in remote regions — some of them in hiding from the gangs they were trying to escape when they fled to the U.S. with their children. Others are suspicious of strangers, or they may speak only Indigenous languages.

More than 1,000 families remain separated, with the Biden administration saying dozens will be reunited in the next few weeks.

Advocates are fighting for all families who were separated to be granted permanent U.S. residency as compensation for their trauma.