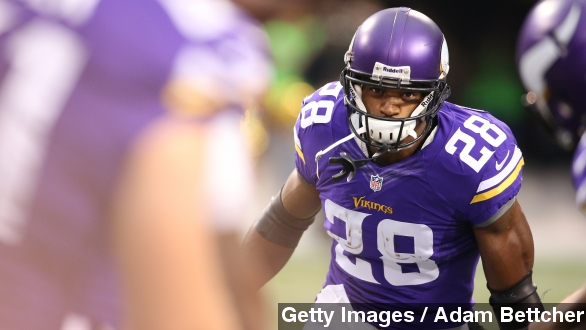 NFL Insider Jason La Canfora reports Peterson's agent got into a "heated exchange" with a Vikings exec at the NFL scouting combine.

More drama has unfolded in the icy relationship between Adrian Peterson and the Minnesota Vikings.

A source close to Peterson also reportedly said the 29-year-old star running back has "no intention of playing [for them] again."

"Dogra made it clear that his client did not want any part of his organization anymore based on some things they believe occurred during the handling of his placement on the exempt list, and his, in essence, year out of football," LaCanfora said.

If true, this really isn't too much of a surprise given Peterson's current feelings for the Vikings organization.

Last week, he told ESPN he felt "uneasy" about returning to Minnesota despite his admiration for the fans — labeling his placement on the exempt list an "ambush" by the Vikings and the NFL. (Video via Nike)

"I truly regret this incident. ... I take full responsibility for my actions," Peterson said.

The 2012 NFL MVP was suspended for all but one game in the 2014 NFL season after pleading no contest to misdemeanor reckless assault for hitting his 4-year-old son with a switch — or small tree branch — in May.

Peterson won't be reinstated into the league until April 15 at the soonest. He's contractually bound to the Vikings through 2017 and is owed about $13 million this year.

Though, given all the drama surrounding his relationship with the team, there's already been plenty of speculation he'll find another home — or perhaps, his native home — in Texas.

Last year, Peterson and Dallas Cowboys owner Jerry Jones spoke over the phone about the prospect of Peterson suiting up with a blue star on his helmet. And, based on the report, the two have had a pretty cozy relationship.

"The Dallas Cowboy opportunity is out there. ... Adrian wouldn't mind going home to the state of Texas to play for the Cowboys. And it's just possible he's now trying to talk his way out of Minnesota," ESPN's Skip Bayless said.

But sources told the St. Paul Pioneer Press reports that Peterson is looking to be traded to the Cowboys are inaccurate.

Though, according to NBC, Vikings head coach Mike Zimmer says the only reason the sides haven't come together yet is for legal reasons. That all changes once Peterson is reinstated.