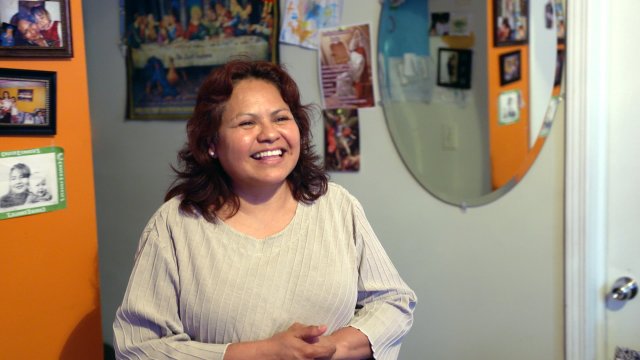 As lawmakers debate more relief for workers, advocates want millions of undocumented workers, ineligible for most federal benefits, to be included.

As lawmakers debate more coronavirus aid for American workers, immigrant advocates worry about the fate of millions of undocumented workers. Even though they disproportionately work in some of the hardest-hit industries, they are, by law, ineligible for most federal benefits.

"I work taking care of elderly people. I'm the one who makes them something to eat, that makes sure they take their medicine. I make sure they're able to bathe themselves," said Martina Sanchez Rodriguez, an undocumented worker.

Sanchez Rodriguez moved to Chicago from Mexico nearly 20 years ago to seek a better life for her children. She's been undocumented ever since. She provides for her household by looking after an elderly woman.

"She tells me if I'm sick to not come to work, to stay at home but she's never told me, 'Hey if you can't work, I'll still pay your wages," Sanchez Rodriguez said.

Two days after Newsy interviewed Sanchez Rodriguez, her employer told her to stop coming to work until the coronavirus crisis gets better.

"I've been in this country for a long time. I've paid my taxes and I've tried to act in the best possible way. And now that they're floating the idea of helping the community and everyone, I would like them to think about all the people like us," Sanchez Rodriguez said.

Immigrant advocates say in our current health crisis, it's imperative to financially help all U.S. residents, documented or not, so they can afford to stay at home. They also stress that, like Sanchez Rodriguez, many struggling undocumented workers have American children. But those who advocate for less immigration say the government should prioritize American citizens.

"We're seeing masks are limited, beds are limited, ventilators are limited. Those resources should be prioritized, first and foremost towards American citizens. And the same goes for the very limited financial resources," said Mike Howell, a senior adviser at the Heritage Foundation.

He added: "Civil society can step up. The employers of illegal aliens, those who have been cheating the government and our fellow American citizen workers, they can step up too."

As for Sanchez Rodriguez, she's desperately looking for a new job to feed her family. And she says she's tired of being 'invisible.'

"I would like to tell all politicians to not forget about us: all the people who are cleaning, taking care of kids and elderly people," Sanchez Rodriguez said.