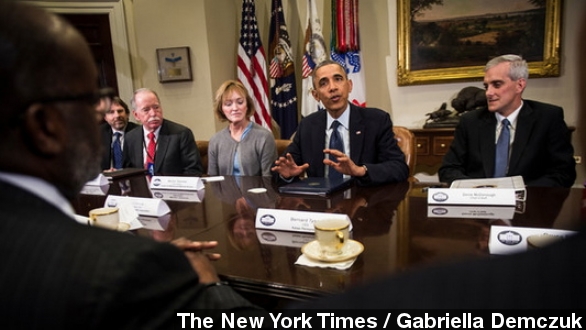 Democrats are weighing their options as the political ramifications of problems with the Affordable Care Act continue to pile up.

The U.S. House passed the "Keep Your Health Plan Act" by a 261-157 vote. But the real magic number in that vote was 39. That's the number of Democrats who broke with their party to vote for major changes to the president's health care reform.

"We fumbled the rollout on this health care law." (Via CNN)

It might not feel like it, but just one month ago, public opinion polls showed Republicans reeling from the effects of the 16-day government shutdown. But that Healthcare.gov fumble, as the president calls it, sure was a game changer. (Via The Wall Street Journal, YouTube / chuckboombuck)

The website glitches, along with millions of Americans receiving health plan cancellations, have amounted to what one Republican representative called a "Category 5 political hurricane." (Via The White House)

Record-low poll numbers for the president also mean tough questions for the rest of the party. Republicans are already showing an eagerness to capitalize on their opponents' troubles. (Via PBS)

Republican Congressman Fred Upton's "Keep Your Health Plan Act" could be an early example of that. The title of the bill even takes a jab at the now-infamous promise from the president's campaign to pass his signature law. (Via USA Today)

REP. JIM MCGOVERN: "This is not a serious attempt to fix the Affordable Care Act. This is a political statement." (Via C-SPAN)

Even so, that statement swayed 39 Democrats, some of whom face a problem the president doesn't have to worry about: re-election. (Via CBS)

In the first month of the rollout, the National Republican Senatorial Committee raised $3.8 million, more money than any other month this year. (Via Euronews)

And the National Republican Congressional Committee has already listed 17 Democrats as "targets" in districts with traditionally close races.

On Sunday's "Meet the Press," Nancy Pelosi called the rollout "terrible." But she said the initial problems would just be a blemish on a future policy success.

REP. NANCY PELOSI: "We must remain calm when we talk about the health of our country. ... I have full confidence, as do my members, whatever, however they voted on this. This is political; they respond politically." (Via NBC)

In an interview with ABC's "This Week," Democratic Sen. Kirsten Gillibrand compared the motivations of the 39 defectors to President Obama's own efforts at administrative fixes to the law.

"If they're trying to allay someone's concern to say, 'Listen, we're going to make sure there is something affordable, and during this transition period where implementation has been rocky, we're going to allay your concerns,' that's reasonable." (Via ABC)

But The New York Times notes voting for Republican bills on health care might not be a wise political move, even after the HealthCare.gov disaster. After Friday's vote, Republicans "mocked vulnerable Democrats who voted yes as political turncoats running from past votes."

President Obama has already said he would veto Upton's bill, should it make it to his desk, saying it would gut the ACA by allowing plans that don't meet the law's standards. (Via WLNY)

And although one would expect a Republican bill affecting Obamacare to go nowhere in the Democrat-controlled Senate, Democratic Sen. Mary Landrieu has said she's considering bringing up a similar measure.