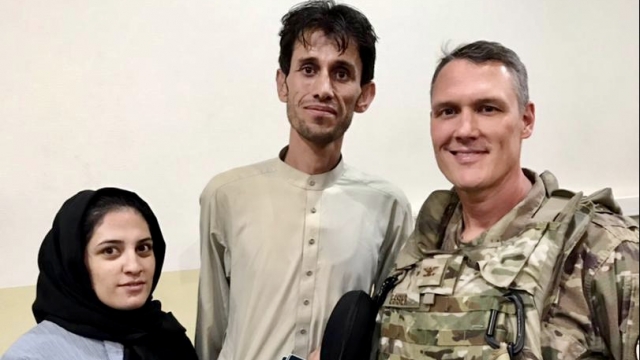 Esser deployed to the region in March and began working with Turkish and NATO forces at HKIA. That's when he met Jawid Afzali.

A week after military evacuations concluded in Afghanistan, a young family is safe in Texas all thanks to this Air Force commander who wanted to give credit for the rescue to those who died during the suicide bombing near a gate at the Kabul airport.

"I kind of felt like if that was that was my family, you know, I feel like there was nothing that would have stopped me from making sure I got him out of there," Air Force Col. Thomas P. Esser said.

Esser deployed to the region in March and began working with Turkish and NATO forces at Hamid Karzai International Airport. That's when he met Jawid Afzali, who worked with the Afghan border police. After working together for several months, Afzali approached Esser with tears in his eyes.

"I immediately asked what was wrong and he said, 'Sir, my family is in Kabul and I don't know what to do,'" Esser said. "I feared for their safety. I knew he had a daughter – five years old. What I didn't know at the time was his wife was also six months pregnant. And so I could tell he was hurting. And honestly, at that moment, just being a father and a husband, I knew I had to do whatever I could to help him."

"Basically, what we had is some heroes at the gate were able to pull his wife and daughter over a table," he said. "A couple of days later, they were able to locate him, get them to the to the gates and pull them over. And, and we arranged the day that his family got on HKIA. And I wanted to make sure that he was taken care of, because it was just something I felt i had to do so literally walked him through the process, walk them through the terminals, and out onto the tarmac, his plane."

Since arriving in the U.S., Afzali has sent Esser texts and audio messages like these: “"Hello, sir. I am Jawid, I'm arrived to Dallas International Airport in America. I want to inform to you. Thanks a lot for your letter. If you make one, recommend for us also you send me. It's good. Thank you."

He, his wife and their young daughter are now at processing center in Donna, Texas. Where they are heading next is to be determined, but Esser says he hopes to see the family again once they are settled.