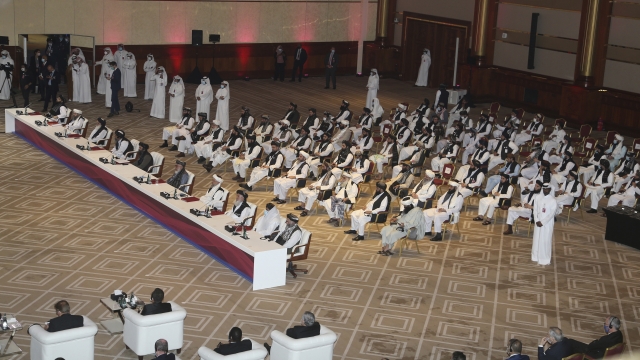 The negotiations began in Qatar on Saturday.

The Afghan government and Taliban have entered their first peace talks after several delays.

The historic U.S.-brokered negotiations began in Qatar's capital of Doha Saturday. U.S. Secretary of State Mike Pompeo flew in for the opening ceremony.

"I would urge you, as you make your decisions, you should keep in mind that your choices and conduct will affect both the size and scope of United States' future assistance," Pompeo said. "Our hope is that you will reach a sustainable peace, and our goal is an enduring partnership with Afghanistan."

The U.S. has been embroiled in Afghanistan's conflict since it invaded after the September 11, 2001 attacks and toppled the Taliban regime for sheltering Osama bin Laden and al-Qaeda militants.

"We will defeat the enemy and win the war on terror."

The negotiations are part of the February U.S.-Taliban peace agreement. It called for freeing 1,000 Afghan government and military personnel from Taliban captivity in exchange for the government releasing 5,000 Taliban prisoners.

But the Afghan government reversed a decision to free its last 320 Taliban prisoners until the insurgents released more government soldiers. The prisoner feud, and continued violence, stalled peace talks.

The aim of negotiations is to end the war by forming a power-sharing agreement for governance. If this deal is successful, it would mark the first time in generations that an Afghan government was formed through diplomacy instead of armed conquest.