Afghan Interpreters Fear Being Left Behind 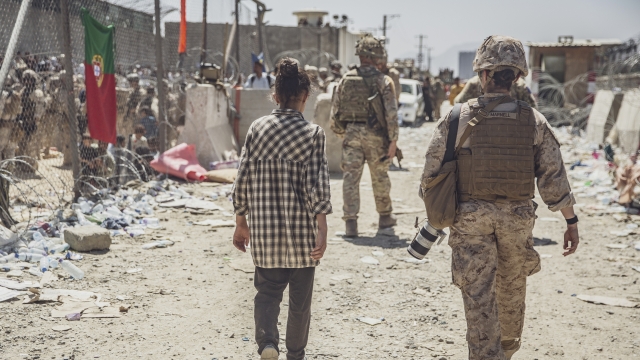 For hundreds of thousands of Afghan allies, the window for getting airlifted to safety is quickly closing.

Evacuation flights from Kabul are back on — just a day after a suicide bombing killed 13 American service members and dozens of Afghans.

But for hundreds of thousands of vulnerable Afghans, the window for getting airlifted to safety is quickly closing.

"It is not possible for our family to make it to the airport and now the situation is really scary," said former interpreter Hadi Zalmay.

As days are becoming just hours away from the deadline for the United States withdrawal, Afghan interpreters told Newsy they are feeling increasingly hopeless.

Another former interpreter, Abdul, said, "Today I tried all of the airport gates and all of the gates were closed and the main road was blocked."

Even those brave enough to try another trip to the airport face a grim reality.

"The Taliban are beating us," Abdul said. "They are not letting us inside the airport."

The threat level remains high. President Biden's national security team warned him on Friday that another terror attack in Kabul is likely.

"The threat is ongoing and it is active," said White House Press Secretary Jen Psaki. "Our troops are in danger and that continues to be the case every day that they are there."

The White House said Friday that over 12,000 people had been airlifted over the previous 24 hours — despite the attacks.

Sources confirmed to Newsy that some evacuees are now being escorted in by bus or helicopter because of continued terrorism threats.

But for Afghan allies left behind, it all feels unfair.

"Who are these people in the buses, who are they, where are they going? We don't have any information," Abdul said. "Please. Help us, please."

The U.S. says coalition forces have evacuated more than 100,000 people since Aug. 14 in one of the largest airlift operations ever.

But rights groups estimate that twice as many Afghans who may be eligible for expedited American visas remain in Afghanistan.

"I don't know what happens to our case or what will happen to us, to our future, our life, to our kids," Zalmay said.

Outside of Kabul, thousands of Afghans have been fleeing by land to Pakistan and Iran these past couple weeks.

The United Nations says up to half a million people could flee in a "worse-case scenario" in the coming months.