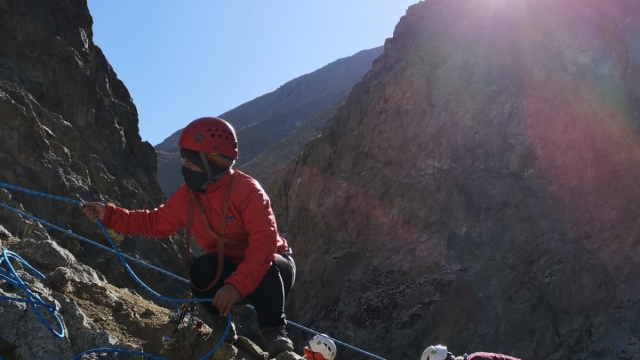 Afghanistan's female athletes and the organizations that support them are bracing themselves as the Taliban gains territory in the country.

Just a few years ago, one of the biggest concerns for rock climbers with Ascend: Leadership through Athletics in Afghanistan was not slipping.

Today, with the country upended as the U.S. and other international forces leave, both the future of their climbing and of their country is uncertain.

"I think for any young woman coming up now, a picture of what the future holds is not promising at all," said Patricia Gossman, associate Asia director of Human Rights Watch.

As Taliban and Afghan forces battle for control of the country, Afghanistan's female athletes and the organizations that support them are bracing for what could come, including a return to oppressive measures against women.

"This year, it's more about security. I cannot go to the mountain, I cannot climb, I cannot be in the tent. I missed the climbing groups. And this is not easy to accept," an Afghan instructor with Ascend said.

The voice you are hearing is one of two young Afghan women with Ascend, a leadership organization that works with young women in Afghanistan through climbing. They agreed to speak with Newsy on the condition that their faces are not shown, and they are not named for their safety.

"They have grown up in a time where there was a security bubble provided. And if that gets taken away, as it has been, are we really going to leave them to their own fate?" asked Marina LeGree, founder of Ascend.

With mounting security concerns, organizations like Ascend are working carefully to balance the safety of the women they serve with their determination to remain active.

"We're a leadership program that uses mountaineering, and if there's ever a time to lead, it's now when there's crisis after crisis," LeGree said.

Since 2014, Ascend has been working with young women in Kabul to develop physical and mental strength through exercise, rock climbing, wilderness training and team-building activities.

"We have a four-story building that can accommodate 75 girls at a time. That's how many we have now full time, coming through six days a week," LeGree said.

"Climbing is a very different sport. When we're climbing the mountain, you're free. We feel like a bird that wants to fly. Because in our society, we have a lot of problems, but in the mountains we can be far from the city, far from the problems," an instructor said.

Ascend, like so many programs, is hopeful that the changes in mindset they've been able to generate when it comes to women participating in sports will remain firmly rooted in Afghanistan.

“Our family is supporting me. They are happy now. They believe in me. Our daughter is strong now," another Afghan instructor with Ascend said.

But these athletes will need help from abroad.

"My biggest fear actually is disengagement," Gossman said. "That's what I hear repeatedly from activists on the ground, from women's rights groups saying, 'Don't walk away, don't just wash your hands of this, we need you now more than ever.'"

"I just don't think that people are going to accept a vision of Afghanistan the way the Taliban see it, it's just it's not that simple," LeGree said. "We're not leaving until somebody comes to our building and forces us out, you know. We're not leaving."