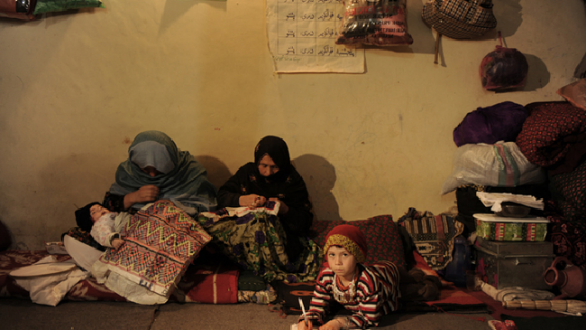 More than 12 years after the Taliban’s ouster, Afghanistan is considering bringing back stoning as a punishment for adulterers.

Afghanistan is looking to bring back one of its most appalling forms of punishment — what was once a common symbol of Taliban rule.

When this video surfaced two years ago showing a couple getting stoned death by hundreds of their neighbors, it sparked an uproar outside of Afghanistan.  (Via BBC)

But within the country, Afghanistan’s justice ministry is considering making public stoning a legal punishment for convicted adulterers. (Via Amnesty International)

Under a draft plan obtained by The Telegraph, unmarried men and women found to be cheating on their partners could be subject to 100 lashings. For married adulterers, the punishment would be public stoning.

The Afghan Ministry of Justice says the draft penal code still needs about two more years of work before it gets submitted for review. Still, its director of legislation defended the plan, telling The Wall Street Journal, "The Islamic Sharia instructs us to do so ... There is a verse in the Quran about it."

Stonings, along with amputations and executions, were for more than a decade a common practice under Taliban rule. But since 2001, Afghanistan's new Western-backed government has pledged to do more to protect human rights, especially those of women.

Rape is now illegal in Afghanistan, millions of young girls started attending schools and the current constitution made women and men equal under the law. (Via Journeyman Pictures)

But equal in-name-only, say some critics, who point out approximately 400 Afghan women and girls are in prison for so-called moral crimes, and attacks against pro-women legislation continue — which could place international aid in jeopardy.

About $16 billion is tied in part to Afghanistan's progress in the protection of human rights. Norway recently cut off its aid to Afghanistan on the grounds the country wasn't doing enough to protects the rights of women. (Via U.S. State Department)

Human Rights Watch is calling on international donors to withhold funding should the Afghan government approve the stoning plan.