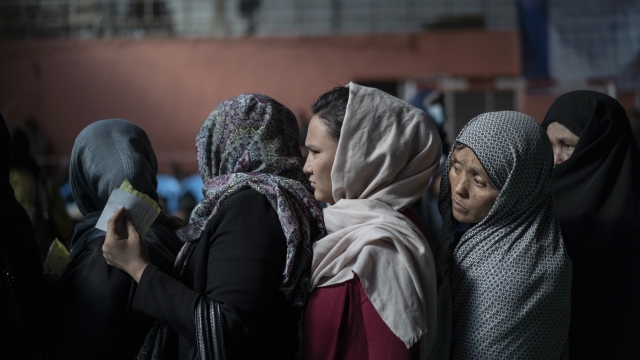 According to the World Food Program, 1 in 3 Afghans are going hungry and parents in 95% of households are eating less and skipping more meals.

The U.N.'s World Food Program said Monday the number of people living in near-famine conditions in Afghanistan has risen to 8.7 million, up by 3 million from earlier this year.

A severe drought is one cause, but also, more and more people simply can't afford to buy food.

Five attackers were also killed. It was one of the most brazen ISIS attacks yet since the Taliban took control of Afghanistan.

The country's economy had been rapidly declining under the previous U.S.-backed government, which struggled to pay salaries to its employees. Now the economy is in full-fledged meltdown after the Taliban seized power in August.

The U.S. and other Western countries have cut off direct financial assistance, while the Taliban government cannot access billions of dollars in Afghan national reserves held abroad. As a result, millions of Afghans have not received salaries for months.

Worldwide, the WFP said Monday the number of people on the edge of famine has risen to 45 million in 43 countries.

The number is up from 42 million earlier this year, largely driven by the rise in Afghanistan.