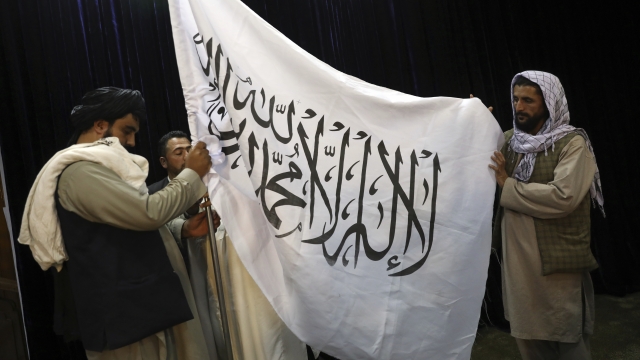 People in Kabul have been deleting their photos, text messages, and social media accounts. Others, including women in the government, are in hiding.

The Taliban held its first press conference since seizing the country on Sunday in an effort to rewrite the narrative of their brutal Medieval rule in the '90s.

Sitting at the Media Center in Kabul, where the government media chief who was recently killed by the Taliban worked, Taliban spokesperson Zabihullah Mujahid promised a peaceful and inclusive Afghanistan with women holding rights under Islamic law and those who worked with the U.S. and other foreign countries "forgiven."

But Newsy has learned the Taliban is trying to control the spread of information: some asking Afghans for their cell phones, scanning their apps and conversations. People in Kabul have been deleting their photos, text messages, and social media accounts, fearing retribution for their American connections. Others, including women in the Afghan government, are in hiding or have gone completely dark.

This policing of communication comes with reports of revenge killings and girls forced into marriage. An Afghan mother said militants killed her sons and forced her daughters-in-law to marry fighters.

Women began protesting on the streets of Kabul Tuesday, not wanting to go back to rape, stoning, and burns.

When it comes to theft, the Taliban's head of intelligence for Kabul says looters are being arrested. But a prominent businessmen says a man "forcedly drove" his armored car.

At Hamid Karzai International Airport, where Afghans have swarmed in a desperate attempt to flee the country, U.S. officials say the Taliban has refrained from aggression.

Major General Hank Taylor said, "We have had no hostile interactions, no attack and no threat by the Taliban."

Jets are arriving and departing. But a fear among Afghans holds of what happens when U.S. troops leave. An interpreter telling us he has a ticket to board a military flight, but couldn't break through a crowd at the airport.

His children, scared and confused as he texted Newsy, "May God help us."