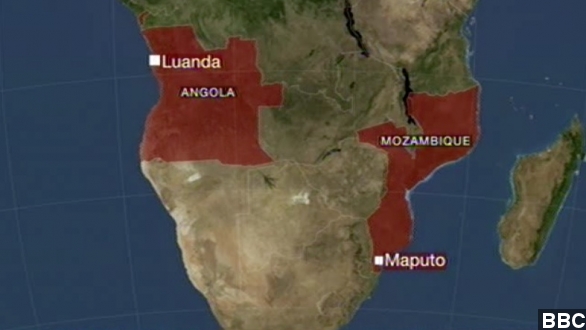 A commercial flight that vanished over Southern Africa has been found in Namibia, whose government says all that remains of the plane is ashes.

A commercial flight that vanished over Southern Africa has been found — and Namibia's government says ashes are all that remains of the aircraft.

All passengers and crew on board are reported dead. The flight took off from Mozambique's capital Friday around 11:30 a.m. local time. It was due in Angola's capital, Luanda, at 2:10. But it lost all contact with flight control two hours after takeoff — somewhere over northern Namibia. (Via Google)

Government officials from Namibia say the plane's wreckage was found in a deeply forested national park, near a village where residents said they heard a loud explosion Friday. (Via France 24)

"The authorities say that most of those on board were Mozambican or Angolan, and several more were Portuguese."

The BBC also reports France, Brazil and China each lost one citizen in the crash. Now, a flight losing contact with no apparent warning like this is uncommon, but Angola has seen a similar incident in the past decade.

In 2003, a Boeing 727 with only two men known to be on board took off from Angola's capital toward the Atlantic and never once made contact with flight control. The remains of that flight have never been found. (Via Air & Space Smithsonian)