After 1 Year Of #MeToo, Are Reporters Handling The Topic Responsibly? 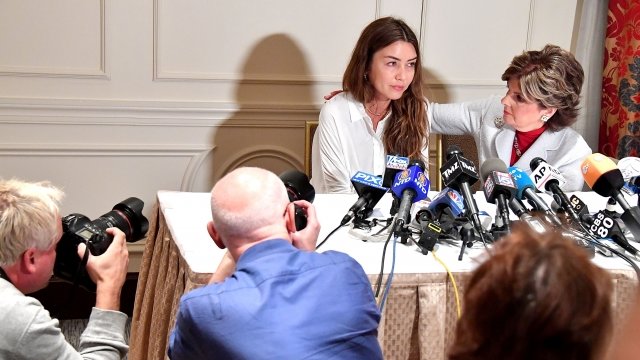 One year after the start of the #MeToo movement, how can news outlets and reporters improve their coverage of sexual misconduct?

It's been more than a year since the start of the #MeToo movement, which began when The New York Times published its investigation into Harvey Weinstein. Since then, Bloomberg reports at least 425 prominent people have been publicly accused of sexual misconduct.

There's this intrinsic link between the #MeToo movement and #MeToo coverage. The latter helped launch the former, while the former magnified news outlets' coverage of sexual misconduct. The Women's Media Center compared the content of major news outlets from May 2017 to August 2018 and found that the number of articles about sexual assault had risen by around 30 percent.

In a statement, one of the co-authors of the report said: "The media has a critical role to play in helping shift our culture, by credibly presenting accusations, doing its own investigations, and explaining the context in which an alleged attack occurred. It is beyond time that the media treat women survivors with the respect they deserve."

"Hands down, victim blaming is at the center of most reporting. Or to put it another way, most reporting is done from a perpetrator's perspective," researcher Claudia Garcia-Rojas told Newsy. "And that continues to be the case that I see in both local reporting on stories that may not be as mainstream, that may not be as high-profile nationally, and also in cases and stories that are high-profile cases."

Claudia Garcia-Rojas developed a media toolkit on "Reporting on Rape and Sexual Violence." It helps guide news outlets, including Newsy, on the difficulties of reporting on the sensitive topics. That includes avoiding sensationalism and victim-blaming — issues that aren't new to the coverage of sexual violence.

"We were seeing patterns in terms of how those stories were being reported, and those patterns pointed to a lot of victim-blaming, a lack of context, a lack of historical or cultural interpretations in the story, stories that were not coming from a trauma-informed perspective, and also stories that were very much treating survivors as a monolith," Garcia-Rojas told Newsy.

Those patterns in reporting reflect and contribute to what experts call "rape culture" — and that could have a serious impact on real world behavior. A study published in the Quarterly Journal of Political Science analyzed more than 300,000 rape-related news stories published by 279 U.S. newspapers between 2000 and 2013. Just 3 percent of the articles analyzed contained components of rape culture, but in the areas where those articles were published, the researchers say police received more frequent reports of rape and made fewer arrests in response.

Five years after the end of that sample — and six years after the "Reporting on Rape and Sexual Violence" toolkit was published — Garcia-Rojas says conversations surrounding the topics have changed. And because of that, she says she's been working on updating her guide.

"I'm going to expand the language section, develop a much more user-friendly statistics section, revise our good recording/bad reporting analysis and offer a more trauma-informed framework for people who are writing on these issues," Garcia-Rojas said.

The media toolkit stresses that one of the most important aspects of "good," constructive and informative reporting is context — making sure readers or viewers understand the patterns and "broader social concerns" of sexual violence.

VICE News correspondent Isobel Yeung's special report "Consent" goes into some of the most nuanced, but misunderstood, aspects of sexual violence: consent and accountability. Her team spent around six months researching the topic before it actually started filming.

"I felt like there was a huge amount of misunderstanding around the topic of consent," Yeung told Newsy. "I also felt like I wanted to bridge that, and I wanted to understand why there was so much misunderstanding. ... I always knew I wanted to explore also what accountability looks like, and how we can kind of reach these differences and have a more nuanced conversation about it. I definitely didn't really know enough about it in hindsight."

One of things that "Consent" did was take the headlines of the #MeToo movement, most notably the allegations surrounding actor Aziz Ansari, and connect them to the personal struggles and misunderstandings of consent that normal, everyday people face. In response to the documentary, Yeung said male viewers reached out to her, telling her that the report made them reassess and re-evaluate their own sexual experiences.

"I think that the #MeToo movement as a whole has kind of entered this new chapter and just continues to evolve and get bigger and bigger," Yeung said. "I think that — I'm going to hope that it will continue to gain momentum. But I also hope that these conversations move beyond these very black and white, very noisy accusatory debates, and that we are able to kind of approach things with some humanity, and that we can also question our own roles and all of this.""I think that we, as media, have a responsibility to do that in order to kind of make sure that this movement continues in a responsible manner."