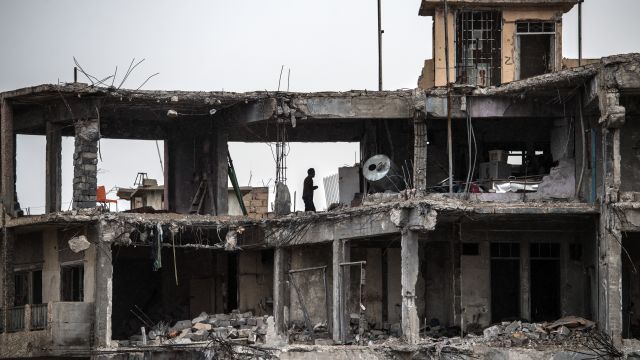 ISIS' so-called caliphate is shrinking. It controls less territory than ever in Iraq and Syria. But looking only at its physical borders can be misleading because ISIS' broader influence is on the web.

But even when ISIS is physically wiped out, what happens to its digital caliphate?

For ISIS, fighting in Iraq, Syria, Yemen and elsewhere is only half the battle. The other half is online. ISIS has rooted itself in social media channels so it can spread its propaganda using videos, photos, graphics and faux news wires.

In the digital caliphate's heyday, Twitter was the group's platform of choice. ISIS had tens of thousands of Twitter accounts tweeting every day, pushing the group's messages every day, and reaching out to vulnerable potential recruits every day. It peaked around the time journalist James Foley was murdered. That video was shared widely on the site.

Breaking Down ISIS Propaganda By Its Source

ISIS propaganda comes in many forms — magazine, radio, "news agency." Here's a look at a few of them.

But Twitter eventually started banning accounts. So ISIS moved to a new platform to deliver its message: Telegram, an encrypted messaging app. Accounts still get banned, but it's clear ISIS has been able to retain its media distribution network and continue releasing propaganda.

The group has lost a lot of territory and continues to lose more every day. But, even if ISIS loses every inch of its land, that still might not be enough to shut down its digital caliphate, and the group's propagandists know that.

This is former ISIS spokesman Abu Mohammad al-Adnani a few months before he was killed in a U.S. drone strike last year.

Losing control of its major cities would obviously make these propaganda videos more difficult to create. But experts on ISIS, including Charlie Winter — senior research fellow for the International Centre for the Study of Radicalisation — say the terror group could operate off its ideology and current stock of propaganda for a long time.

And ideologies, good and bad, from Nazi fascism to Soviet Communism, have a way of hanging on even after they're physically destroyed.

Billions of dollars in weapons will be poured into the physical fight against ISIS. But rooting out the group's influence online will be a longer struggle — and an important one.