After Mandela, What's Next For South Africa? 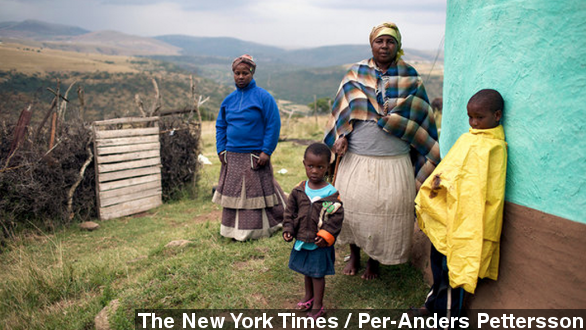 Some 18 years after apartheid, amicable race relations and free elections define South Africa, but so does crime, corruption and economic inequality.

"Never, never and never again shall this beautiful land again experience the oppression of one by another." (Via The White House)

Those words were spoken by Nelson Mandela at his inaugural speech as South Africa's first black president in 1994.

Now, nearly 20 years later, the Rainbow Nation must come to grips with the passing of its most iconic leader and assess whether the country has met his vision of a democratic South Africa with equal opportunities for all. (Via The Telegraph)

South Africa has some of the world's highest rates for violent crimes, with the yearly number of casualties on par with those seen in African countries caught up in civil wars. (Via Press TV)

Los Angeles Times explains the murder rate has slowly decreased since Mandela was elected president but that a dramatic increase in the figures this year is raising fears that the current government's approach to crime is not working.

"The 2012-13 statistics ... are the worst in a decade. ... The figures show increases in the crimes South Africans fear most: murder; attempted murder; violent, armed house robbery; and carjacking."

There are major accusations against current President Jacob Zuma for misusing public funds to, among other things, enhance facilities at his private estate. (Via YouTube / sabcdigitalnews, The Guardian)

The Corruption Perception Index scores countries on a 0-100 scale based on perceived corruption where zero is the most the corrupt and 100 is the most clean. (Via BBC)

But perhaps South Africa's biggest problem is lingering economic and racial inequality even some 18 years after the end of apartheid — something a writer for Bloomberg says is the greatest threat to Mandela's legacy.

And another anti-apartheid revolutionary, Desmond Tutu, said in November that progress in the country would be halted "if the gap between the rich and the poor [is] not narrowed." (Via Live Mint)

Reflecting on Mandela's death, a white South African writer for The Atlantic says the leader's absence is a time for South Africa to look at where it has been and where it wants to go in the future.

"Now that Mandela has died, something will shift in South Africa for good. It will be time to take stock of where we are as a young democracy and realize that ending apartheid was just one battle in a much bigger war. I hope we're ready to fight." (Via The Atlantic)