Brazil's Chapecoense Could Still Be A Championship Team After Crash 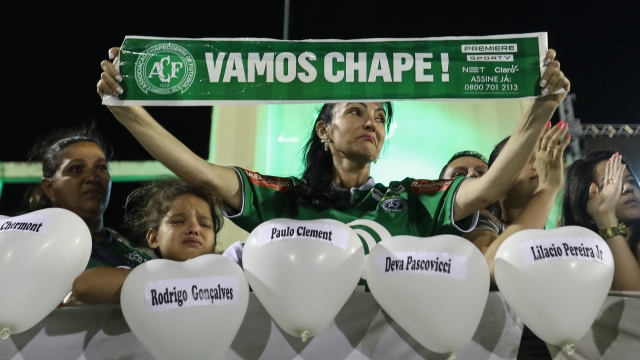 Their Colombian opponents want to forfeit the Copa Sudamericana title.

Despite the horrific plane crash that killed almost all of its players, Brazilian soccer team Chapecoense could still end a fairytale season as champions.

Colombian team Atlético Nacional was set to play Chapecoense in the Copa Sudamericana final — the top prize for all soccer clubs in South America and the biggest match in the team's history.

In light of the tragedy, the players of Atlético Nacional unanimously agreed Chapecoense should be awarded the title.

Chapecoense's plane was on its way to Colombia for the Copa Sudamericana match when it crashed outside Medellîn, killing 71 of the 77 people on board. Only three players survived. The news devastated their home country of Brazil.

"This team was the sweetest team in Brazil, like the second team of everybody's. … They were so nice, so kindly, so friendly that everybody loved the team," ESPN soccer analyst Rubens Pozzi said.

Chapecoense had been in the fourth tier of Brazilian soccer in 2009 before going on an unlikely run that propelled them into Brazil's top league. Just before the crash, they celebrated their berth into the Copa Sudamericana final.

Soccer teams and fans from around the world expressed solidarity with the club. The other teams in Brazil's top league pledged to loan players to Chapecoense and requested for the side to be exempt from relegation for three years.