After The Latest Indictments, Who's Left To Run FIFA? 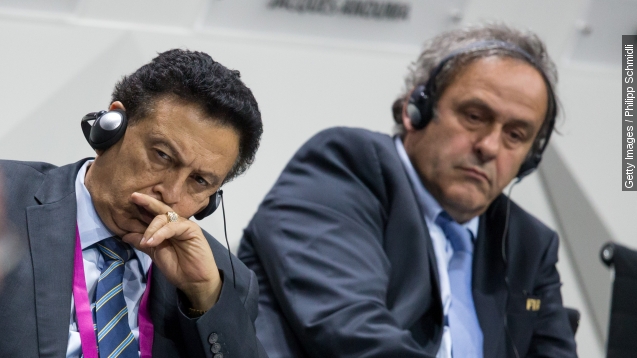 Sixteen more current and former FIFA officials have been indicted on corruption charges, which creates a power vacuum at the top of the organization.

Just as FIFA officials were planning to discuss reform proposals for the global soccer governing body, the U.S. Justice Department released a new 93-count indictment against 16 past and present executives. Charges include money laundering, racketeering and wire fraud.

And with corruption so rampant, FIFA is drawing some unsavory comparisons.

“RICO is the phrase you hear, which is Racketeer Influenced Corrupt Organization, which is basically the law set up to go after the Mafia," Don Riddell said on CNN.

The biggest names to come down were two FIFA vice presidents: Alfredo Hawit Banegas, who’s in charge of North and Central American soccer, and Juan Angel Napout, who runs South America’s soccer confederation. Both were arrested and are facing extradition to the U.S. (Video via BBC)

Those two are on FIFA’s executive committee, which is in charge of deciding where to play tournaments like the World Cup. The committee’s selection process has been marred by allegations of corruption, especially for the next two World Cups in Russia and Qatar.

FIFA had to scramble to replace executives, including three VPs who have been either suspended or arrested after raids in May. And with the new round of indictments, the top of the executive committee could soon look very different.

With Hawit and Napout facing indictment, their futures with FIFA are in doubt. President Sepp Blatter will be out in February when a new president is elected. He and the head of European soccer, Michel Platini, are serving 90-day suspensions, and Platini is facing a lifetime ban.

Almost half of the executive committee is actively fighting corruption charges, and the remaining VPs aren’t too much better. Spain’s Angel Maria Villar was fined for misconduct surrounding the 2018 and 2022 World Cup bids.