AirAsia 8501 Found As Families Learn By Seeing Bodies On TV 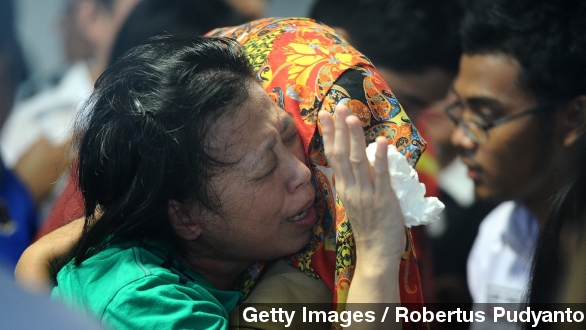 Family members of the passengers on board AirAsia Flight 8501 learned debris and bodies had been found while watching television footage.

Devastating news for the family members of those on board AirAsia Flight 8501 delivered in a devastating way.

As a local station aired video of debris and even bodies from the missing plane, reporters on the ground say many of those loved ones went into hysterics and even needed medical attention.

The plane disappeared Sunday just after the pilot asked for — and was denied — permission to climb to a higher altitude to avoid clouds. Initially, the head of Indonesia's search and rescue agency said he was 95 percent certain debris spotted Tuesday was Flight 8501.

"The site of this debris is only about six miles — 10 kilometers — from where the plane last had contact," reported CNN's Andrew Stevens. "He was 95 percent certain. The only reason he wasn't 100 percent certain is that he hadn't seen it with his own eyes."

Sure enough, AirAsia put out this statement and authorities confirmed by mid-afternoon the red and white colored debris off the coast of Borneo was the missing plane.

But when TV One aired video of the debris and bodies in the water — which we aren't showing — the images made it to screens where those family members were watching a briefing. TV One was one of the most cited video sources for other media since the plane’s disappearance.

"We can see a woman being taken out on a stretcher because she collapsed as soon as she heard that news," BBC's Alice Budisatrijo said. "And then we can also hear a lot of screaming and crying from the room behind me here."

The decision drew outrage over social media, and the Indonesia correspondent for The Age soon tweeted out TV One apologized for airing the graphic images.

Counting passengers and crew, there were 162 people on board.