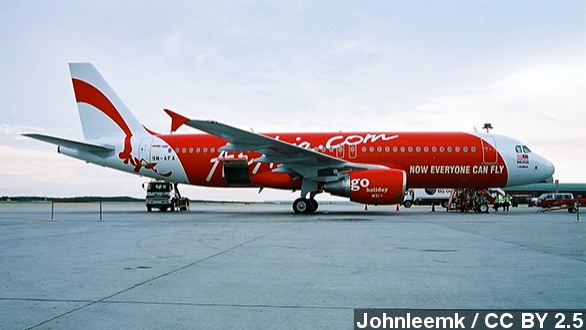 The flight went missing early Sunday carrying 162 people, after the pilot requested a change of course due to bad weather.

An AirAsia passenger jet carrying 162 people has gone missing over the Java Sea during a routine flight from Indonesia to Singapore.

Flight QZ8501 took off from the Indonesian city of Surabaya at about 5:30 a.m. local time Sunday. According to AirAsia, the pilot last made contact with air traffic control at 6:13 a.m., when he asked to change course to avoid bad weather.

There were 155 passengers on board the plane including 16 children, one infant, and seven crew members. Search and rescue operations involving Singapore, Indonesia, and Malaysia are underway, but their efforts are being hampered by poor weather conditions.

An Indonesian Navy spokesman told the BBC, "We've got a little bit of a problem in the area due to bad weather conditions." When the reporter asked, "How big is the search area?" the spokesman said, "It's more than 100 nautical miles."

AirAsia, a Malaysian-based budget carrier, said in a statement the pilot had 6,100 hours of flying experience, and the aircraft, an Airbus 320, had last undergone maintenance Nov. 16. This is the first time the company has lost a plane.

AirAsia CEO Tony Fernandes said on Twitter he is heading to where the plane departed in Surabaya, and expressed his condolences and support for the families of the missing passengers.

This incident comes 9 months after another aviation tragedy in the region, when Flight MH370 disappeared over the Indian Ocean in March.

This video includes images from Getty Images, Johnleemk / CC BY 2.5.