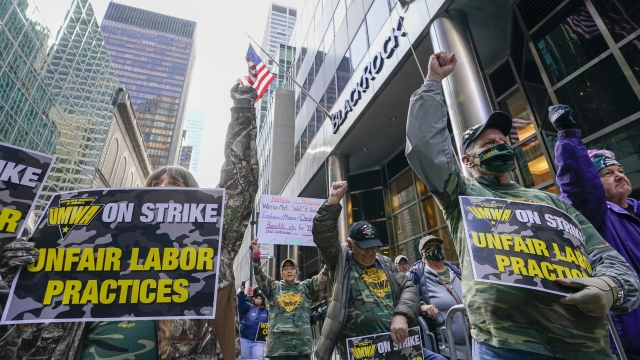 More than 100 workers employed at Warrior Met Coal — which BlackRock is an investor in — are demanding higher wages and better working conditions.

Alabama coal miners are demanding better pay, saying they risk their lives every day with not much to show for it. Hundreds of miners picketed outside the Manhattan headquarters of BlackRock in New York City Thursday.

The miners walked off the job seven months ago, years after they say they gave up millions in concessions to help the company climb out of bankruptcy. Now that BlackRock is doing well again, they want their cut.

A groundswell of workers are organizing to demand change.

"We're striking for respect. We're striking for everything we lost back in 2016," says Brian Kelly, president of United Mine Workers of America Local 2245. "We lost $6 an hour, we only got time off for holidays on Thanksgiving, Christmas Eve and Christmas, the rest of the holidays we had to work, they can work us seven days a week up to 16 hours a day and our health insurance got really lousy."

The miners strike is one of the longest in the country. The U.S. has seen weeks of labor unrest across several industries. Other ongoing strikes include workers at John Deere and Kellogg.