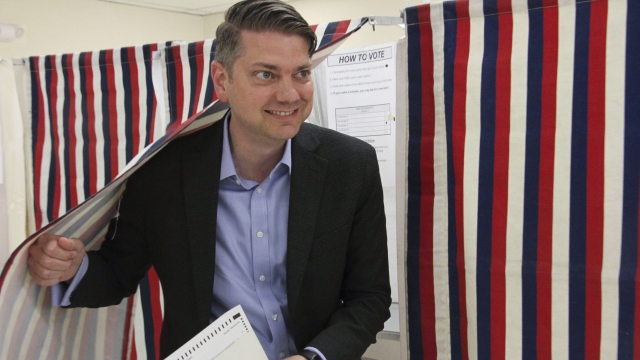 Voters in Alaska will decide if Sarah Palin, who abruptly resigned as governor of Alaska in 2009, will get a second chance in politics.

In Alaska, a rare political opportunity is happening, as Alaskans take to the polls to fill the state's only House seat.

It's a chance at a comeback for a household conservative name.

"To me, Sarah Palin, like Donald Trump her friend, they're my human middle finger that I want to wield," said Christopher McElree, who voted early in Wasilla, Alaska.

Voters here will decide if Palin, who abruptly resigned as governor of Alaska in 2009, will get a second chance in politics; and fill the seat the late Don Young held for 49 years.

"I want to raise a ruckus. And to me, that's what Sarah Palin is about. She's not she doesn't go along. She's not a water carrier. She's not a Republican party, sycophant. You know, she she stands up to those people just like she does to Democrats," McElree said.

But to do so she'll need to defeat another well-known name on the last frontier Nick Begich, the Republican grandson of the late Democratic congressman.

"I have the endorsements of about 70 elected officials current and former here in the state of Alaska. Sarah Palin has none. She has many celebrity endorsements from outside of Alaska, but in Alaska, we care about what Alaskans think," Begich said.

Newsy caught up with Begich at an election eve event in Sarah Palin's hometown of Wasilla, at the home of her ex-in-laws.

"They're great Alaskans are great Americans. And you know, they know Sarah Palin best. And I think that it is fitting that we're out here at their beautiful home here in Wasilla," Begich said.

In a rural state where campaigning statewide means many hours on planes, Palin's high name ID might just give her an edge.

"I'd rather go with somebody I know a little bit about than somebody I don't know anything about," said Christopher Beeson, who voted for Sarah Palin.