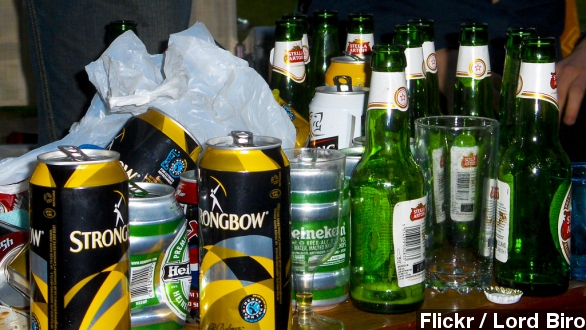 An unconventional method for cleaning up the streets of Amsterdam has some scratching their heads.

An unconventional method for cleaning up the streets of Amsterdam has some scratching their heads.

"They are paying their citizens five cans of beer and sometimes cigarettes to clean the city streets. Now most of the people in the program are admittedly alcoholics ... " (Via KSAZ)

Apparently, the alcoholics in a local park were causing disturbances by fighting, being loud and yelling at women so the group behind the offbeat program, The Rainbow Foundation, decided to put them to work. (Via RT)

And how do you get an alcoholic to do what you want? Give them what they want.

The group of addicts starts work at 9 a.m. with two beers, they get a lunch break that comes with a hot meal and two more beers and the work till the day ends at 3:30 with one last beer and 10 Euros.

Despite how unconventional the program is, the beers and money are provided by government funding which the Los Angeles Times notes isn't surprising in a place like Amsterdam.

"Amsterdam isn’t exactly known for being uptight – its famous Red Light district hosts legal prostitution and marijuana smoking (you can even be offered a pot menu upon entering a "coffee shop")." (Via Los Angeles Times)

And if you know anything about the Rainbow Foundation, this is kind of how they handle business.

The group was set up 35 years ago to deal with heroin addicts. Their solution? Drug Rooms where heroin addicts can go get heroin in a safe environment. (Via De Regenboog Groep)

The Rainbow Foundation is also responsible for Amsterdam's Underground Tours where former drug addicts show tourists where in the city they use to buy and use drugs. (Via YouTube / DeRegenboogGroep)

The Foundation contends that this program is great for the city and the alcoholics saying it gives structure to their lives and keeps them busy which in turn means they drink less. (Via Metro)

But one of the men involved in the program says drinking in a more structured way and drinking less are two different things, and the latter isn't happening.