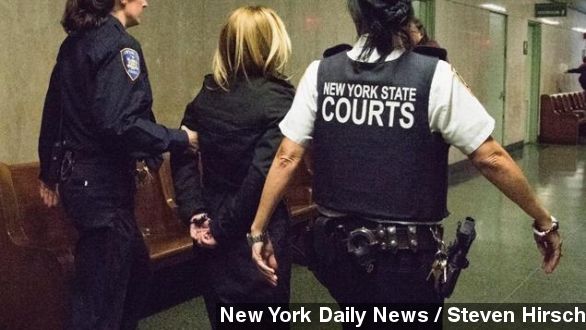 A New York judge found a 41-year-old Canadian woman who claimed she had a brief affair with Alec Baldwin guilty of stalking and harassment Thursday.

A New York judge found a 41-year-old Canadian woman who claimed she had a brief affair with Alec Baldwin guilty of stalking and harassment Thursday.

"Genevieve Sabourin tearful after being sentenced to six months ... on top of time she is serving. She alleged she had a steamy affair with Baldwin, an affair the actor strongly denies." (Via Fox News)

Sabourin was sentenced to 180 days for attempted aggravated harassment, stalking, attempted criminal contempt, harassment and violating an order of protection, with an additional 30 days for courtroom misconduct. She was also prohibited from contacting Baldwin and his wife, Hilaria, for five years. (Via E!)

The publicist and aspiring actress insisted the two had a sexual relationship that Baldwin ended suddenly and without explanation. Her defense claimed she was seeking closure. (Via CNN)

"The two first met on the set of a 2002 film, 'The Adventures of Pluto Nash,' and reconnected at a dinner eight years later."​ (Via ABC)

Baldwin's lawyers argued she repeatedly harassed him — showing up at his building and sending a barrage of emails and texts nightly, fueled by a delusional obsession that made him fear for his and his family's safety for several years. (Via New York Daily News)

This ends a three-day trial of dramatic testimony and impassioned outbursts both in- and outside the courtroom.

"This trial has been an absolute circus ... with Genevieve Sabourin, the woman who stalked Alec Baldwin, shouting out in the courtroom, Baldwin actually tearing up on the witness stand."​ (Via WABC)

Baldwin had several run-ins with paparazzi and reporters throughout the trial. This video shows the actor chasing down and threatening a photographer just hours after a courtroom victory this morning in his stalker case. (Via TMZ)

Before going to trial, Sabourin rejected a plea deal that would have avoided jail time. She will serve her sentence at Rikers Island.