Video Of Children In Aleppo Causes Turkish Presenters To Break Down 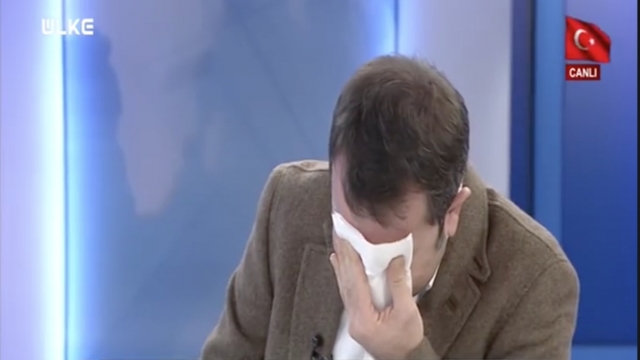 Scenes of a child undergoing an operation without an anesthetic caused two Turkish broadcasters to cry in the middle of their program.

Scenes from the Syrian war left two Turkish broadcasters in tears during the middle of a report.

Journalist Turgay Güler and professor Mehmet Çelik were presenting a program on the civilians trapped in the besieged city of Aleppo.

The broadcast aired footage purportedly showing a 5-year-old child in Aleppo undergoing an operation without an anesthetic. Newsy hasn't been able to verify the authenticity of that video.

Medical resources have been in short supply in Aleppo. All of the city's hospitals were destroyed during the fighting — many in bombings carried out by the Syrian regime and its allies.

The Syrian government has retaken nearly all of Aleppo from the hands of rebel fighters. An effort to evacuate civilians from the city has reportedly been suspended.

The U.S. has repeatedly accused the Syrian regime of committing atrocitiies against civilians in the city. During a recent press conference, Secretary of State John Kerry stated, "We have witnessed indiscriminate slaughter, not accidents of war, not collateral damage but frankly, purposeful — a cynical policy of terrorizing civilians."

Throughout the five-year conflict, Turkey has typically sided with the U.S. in calling for Syrian President Bashar al-Assad's removal from power.

Turkey allows the U.S. to conduct anti-ISIS airstrikes in Syria from a Turkish air force base. The country has also been conducting its own airstrikes in the country, though it's also often targeted Kurdish forces supported by the U.S.

But the country has recently been negotiating with Russia — and without the West — for a fresh cease-fire in Syria.