Essex Police: All 39 People Found Dead In Truck Have Been Identified 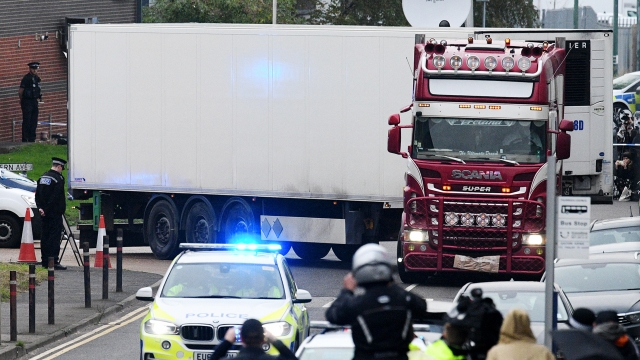 A police official called the identifications an "important step in the investigation."

Essex police announced it has identified the bodies of 39 people found dead in a truck container last month.

The refrigerated truck was flagged down in Essex on Oct. 23, and police discovered the people inside. Thirty-one of the deceased were men and eight were women. Authorities initially believed the people were Chinese "based on the documentation found on them" but later said they believe the victims were Vietnamese when some people came forward believing their loved ones were on the truck.

Essex police worked with Vietnamese police to formally identify the bodies. Police didn't release information about who the deceased were but said in a statement Thursday that families have been informed.

Assistant Chief Constable Tim Smith called the identifications an "important step in the investigation." He also said it enables his team to work with Vietnamese police to support the families.

Vietnamese authorities have made 11 arrests connected to the deaths. A government-run newspaper reported authorities were also collecting the fingerprints of 21 people "suspected of having relations to the case."

In the U.K., the 25-year-old suspected driver of the truck faces 39 counts of manslaughter, as well as human trafficking and immigration offenses. Another man was brought to court on an arrest warrant, and detectives have asked two other men to turn themselves in.