What Is Gelt? A Brief History of the Hanukkah Treat 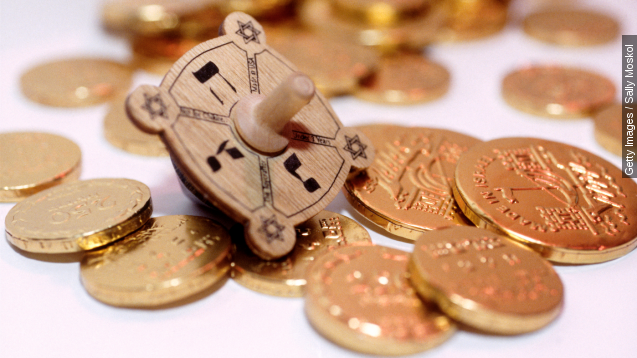 Gelt: a gold or silver Hanukkah treat that youngsters find as tasty as it is traditional.

"That's what Jews do. Gelt!" Dani Luv exclaimed on "Munchies."

Typically identified as a cheap chocolate candy handed out around Hanukkah, gelt symbolizes a Jewish custom that actually has nothing to do with children or chocolate.

"In the 19th century, Hanukkah gelt was basically an end-of-the-year tip for itinerant workers," NPR reported.

Gelt has evolved from that annual tip for a butcher or teacher into a dessert worthy of a gold-plated price tag.

Chicago Bar Transforms Into Hanukkah Hot Spot During The Holidays

The owners of a Chicago bar say their Hanukkah pop-up bar is the first and only place to host such a thing in the city.

Sure, there's still the traditional, waxy gelt you have to chew. But now there's more melt-in-your-mouth variety like these by Veruca Chocolates. The company touts its treats as "Gelt for Grown-Ups" and it costs about 83 cents per chocolate coin, something fancy enough perhaps another candy-crazed Veruca may like.

And it's even possible now to have gelt without the guilt. Several companies now offer fair-trade chocolate crafted under standards that prohibit child labor.

So whether you prefer shelling out some major shekels for sweets or you prefer that yellow mesh bag, there are more ways than ever to satisfy that gelt-y pleasure.