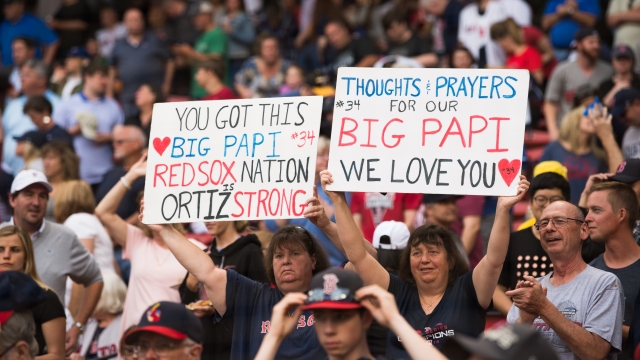 ​Dominican Republic police said the alleged gunman confessed to the shooting after being taken into custody on Wednesday.

The suspected gunman in the shooting of former Boston Red Sox star David Ortiz has been arrested.

Dominican Republic police said in a statement the alleged gunman confessed to the shooting after being taken into custody on Wednesday. Police have also detained five other people in connection to the shooting, and are still looking for another person.

Authorities didn't give a possible motive for the attack, but investigators are treating the case as an attempted murder. The police director said the group was given nearly $8,000 to shoot Ortiz. He added that investigators found the gun used in the shooting, which was buried in the home of one of the suspects.

Ortiz was shot while at a club in the Dominican Republic on Sunday night. Police said he was shot in the back and the bullet went through his stomach, forcing doctors to remove part of his intestines and gall bladder. His friend, Dominican TV host Jhoel Lopez, was also injured.

The MLB all-star was flown back to the U.S. on Monday, and is currently recuperating at a hospital in Boston. Ortiz's wife said in a statement Wednesday that her husband "will remain in the ICU for the coming days, but he is making good progress towards recovery."