Almost A Dozen People Have Died In Chile's Growing Protests 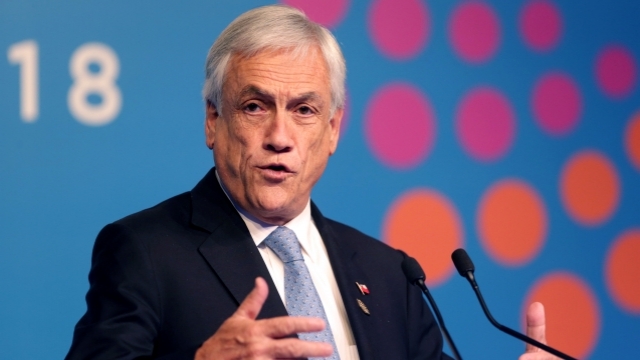 Chile's president promised to suspend a planned fare hike for the subway system, but it did little to slow growing protests over the weekend.

As of Monday morning, nearly a dozen deaths have been confirmed as protesters and law enforcement continue to clash throughout the country.

Students began protesting last week against the hike in public transportation fare. The government said the increase was necessary because of the country's "currency exchange fluctuations." Protesters looted stores, set buses on fire and threw debris onto train tracks. By Friday, all 136 metro stations in Santiago had been closed due to "serious destruction." People are stranded at Chile's airports because employees can't make it to work.

On Saturday, President Sebastián Piñera announced the government would suspend the fare hike in response to the protests. But that didn't stop protesters from taking to the streets.

Throughout the weekend, protesters could be heard chanting, "It's not about 30 pesos, it's about 30 years," referring to the country’s history with dictatorships and the growing economic inequality among citizens, according to The Washington Post.

The government declared a state of emergency and called the military onto the streets of the capital city for the first time since the end of the regime of former dictator Augusto Pinochet in 1990. Three thousand members of the military and 5,000 members of the national police force are now on the ground.

On Sunday, Piñera said in a news conference, "We are at war against a powerful enemy willing to use violence with no limits."

Other parts of the country are expected to issue states of emergency in the coming days.