'Hatreon' Is The New Crowdfunding Platform For The 'Alt-Right' 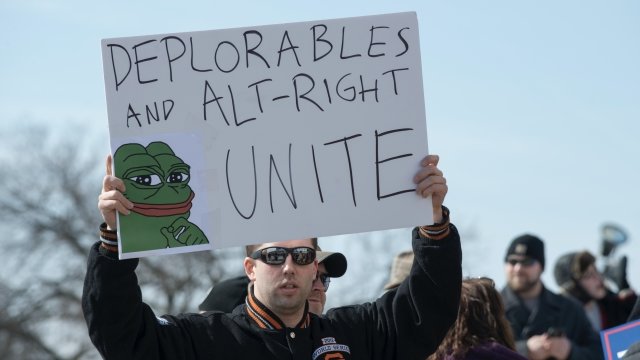 Banned from sites like Patreon and PayPal, so-called "alt-right" influencers are moving to "Hatreon" to fund projects.

Members of the so-called "alt-right" and far-right movements are looking for new ways to fund their projects.

But that's been pretty difficult for them. The self-described "alt-right" is a white nationalist group. For the past couple months, major companies like PayPal, GoFundMe and Patreon limited access to or straight-up banned people associated with it. Oftentimes this was because users violated hate speech policies or threatened people's lives with their projects.

As a result, banned users began searching for what they called "free speech alternatives." In June, that search ended with the launch of crowdfunding site "Hatreon."

Current users of the site include Richard Spencer, white nationalist and inventor of the "alt-right" moniker; anonymous news parody personality TV KWA; and "ethno nationalist" content creator Tara McCarthy. Each of them says they'll use Hatreon to fund their content.

The Southern Baptist Convention condemned the so-called "alt-right" and white supremacy during its annual meeting.

Some people are dubious of the service — and many took to Twitter to criticize the name.

Wilson doesn't consider himself to be part of the "alt-right," but his projects and personal philosophies have been well-supported by the community.

Those projects include the 3-D-printed gun. It was developed to upend gun control laws but received massive criticism due to safety and social concerns. Indiegogo actually banned the project from collecting funds, and the 3-D printer manufacturer seized the printer that was leased to the group.

Hatreon is currently still in its "soft launch," and prospective users need to be invited in order to raise funds.

Other crowd-sourcing sites, like Counter.Fund and WeSearchr, already exist for "alt-right"-associated influencers. The latter is often used to support "alt-right" rallies or legal defense funds.

As of Saturday, the legal defense fund for neo-Nazi site The Daily Stormer, which is defending itself against a harassment suit filed by the Southern Poverty Law Center, had reached nearly $160,000.