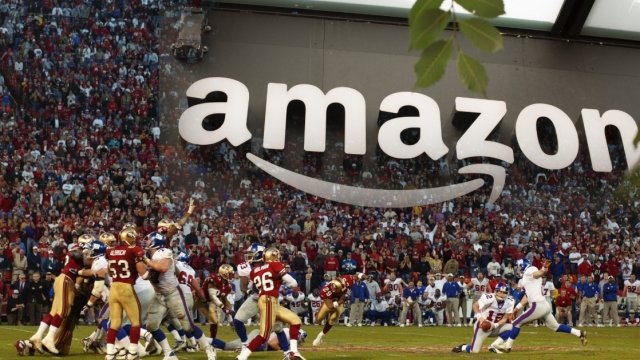 Amazon is one of the latest companies to utilize the Rooney Rule.

The Rooney Rule is a diversity method that started in the NFL — but now tech companies are adopting the practice.

So, what's the Rooney Rule? Well, it requires NFL teams that are looking for head coaches and other top roles to interview minorities — and sometimes women — before hiring anyone. It's named after Dan Rooney, who owned the Pittsburgh Steelers. He led an effort in 2003 to implement the rule after two successful black coaches were fired. The firings prompted a damning report by U.S. civil rights attorneys and calls for diversity in the league's leadership.

Author Jeremi Duru, who's written about race in the NFL, said he hopes NFL teams will eventually work harder to recruit coaches from all over: "If you think broadly about coaching and you slow down and take time with your hire, you're going to find yourself with the best outcome," he said.

The Weirdest Job Interviews Ever Happen For The NFL Draft

NFL rookies face invasive questions and don't get to negotiate pay — but it's worth it to play in the league.

Some have applauded the Rooney Rule's intent — including the NAACP. Last year, an Institute for Diversity and Ethics in Sports study attributed the policy to increasing the number of minority head coaches over the years.

But researchers at Indiana University didn't agree with the methodology of that study, so they did their own. IU researchers found other reasons besides race for an increase of minority coaches. In one instance, Rooney said the hiring of a coach in 2007 didn't stem from his rule.

But regardless of whether the rule is effective, tech companies like Facebook and Pinterest are following suit. It's not news to say tech companies struggle with diversity — especially in leadership positions. Amazon is one of the most recent companies to adopt the rule for its board of directors — even though it did so reluctantly.

Amazon's board has 10 people. Only three of them are women, and there are no people of color. That's why shareholders prompted the company to adopt the Rooney Rule.

Amazon shareholders admit the application of the Rooney Rule is a "modest" proposal. Of course, it will take time and data to see if this method will be effective in the tech world. But they hope it'll help demonstrate that the company is taking action to address the issue.