Amazon Stock Responds To Trump Tweet With A Multibillion-Dollar Drop 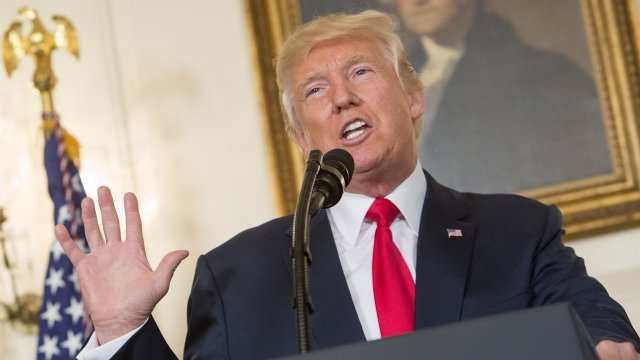 After President Trump tweeted Amazon was hurting retailers, its market value lost billions of dollars. He's butted heads with the company before.

He wrote, "Amazon is doing great damage to tax paying retailers. Towns, cities and states throughout the U.S. are being hurt - many jobs being lost!"

Amazon is somewhat responsible for the woes of physical retailers losing business to online shopping. But its impact on the job market isn't all negative — the company says it wants to hire 100,000 full-time employees by mid-2018.

Amazon's stock rebounded somewhat throughout the day, and the multibillion-dollar loss is only a drop in the bucket from Amazon's overall value of more than $460 billion.

But that stock market dip goes to show that a statement from the president can have a lot of sway over investors. And Trump has apparently had a bone to pick with Amazon for a few years now.

He seems to be upset by what he perceives as unfair negative coverage from The Washington Post, now owned by Amazon founder Jeff Bezos.

Trump claimed in the past that Amazon doesn't pay its fair share in taxes, tweeting in December 2015 that "If @amazon ever had to pay fair taxes, its stock would crash and it would crumble like a paper bag."

In July, Trump said Amazon didn't pay "internet taxes" but it's unclear what he meant. Since April, Amazon has collected sales tax in the 45 states that impose them, even though it doesn't technically have to.

Now that he's in the White House, Trump could look to push for higher taxes on internet retailers, like Amazon.

After the health care reform effort failed, Trump and Republicans made tax reform their top priority. But they did at one point say, "The goal is a plan that reduces tax rates as much as possible."