Tracking Down Counterfeit Goods On Amazon 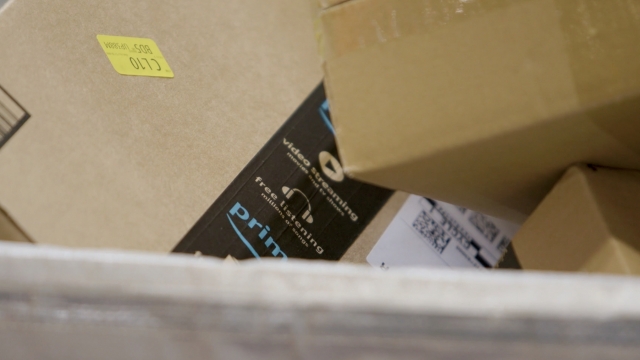 Last year, almost $300 billion of products were sold on Amazon through third parties.

If you buy something on a large E-commerce site like Amazon, around half the time it’s not coming from the tech giant itself, but from a third-party seller. E-commerce companies rely on third-party sellers to supply products to consumers quickly, especially those that may not be available at their warehouses.

Experts say this third-party system, coupled with increased consumer demand around E-commerce, is driving a huge chunk of counterfeit good sales in the U.S.

"Twenty years ago, if you were buying a counterfeit product, it was typically apparel and you were going to a flea market to buy that good," said Michael Hanson, with the Buy Safe America Coalition. "With the advent of the internet, it opened up consumers to a whole different range of goods that they could buy. Criminals also saw that; they saw the opportunity with more and more people getting online."

In 2020, third-party businesses accounted for nearly 60% of all sales on Amazon’s Marketplace. Amazon also added more than 200,000 new third-party sellers in 2020, a 45 percent increase from the year before.

Counterfeit goods experts told Newsy that the barriers to entry for third-party sellers selling counterfeits is so low that there's no real disincentive to stay away from these platforms.

"You don't have to make an agreement with a store or buy a stall at a flea market. All you have to do is  some basic set up work and become a third-party seller on a website like Amazon or Walmart.com, or any of these major websites that are offering third party sellers the opportunity to sell directly to the consumers," said Kimberly Gianopoulos, with the U.S. Government Accountability Office.

Gianopoulos told Newsy that getting rid of these bad actors is a lot like playing whack-a-mole. According to Amazon's website, it bans the sale of counterfeit products on their platform, including bootlegs or pirated copies of content. But that content can often be hard to find and widespread across its marketplace. Still, Amazon proactively removed 10 billion counterfeit listings in 2020, up from 6 billion the year before. It also destroyed 2 million items in its warehouses that were identified as counterfeits.

"If they get caught or if they get taken down, they can pop up again under a different name or using a different method, or going on to a different thirdparty or different websites, such as going from Amazon to Newegg or from Wal-Mart to Sears Marketplace, or whatever it might be in order to continue to sell their goods," Gianopoulos said.

Congress is looking to push these e-commerce companies to better track potential counterfeit sellers. A bipartisan group of Senators wants to pass the INFORM Consumers Act, which would require online marketplaces to provide more transparent data on the identity of third-party sellers.

"When you go on so many of these websites, these marketplaces, you don't know who you're buying from. And there's really no regulations around that. So what the bill would do is to say, 'Hey, marketplaces, Amazon, Facebook. If you have a high volume seller, make sure that you know who they are. Let's verify those sellers and make sure that consumers have the ability to see who they're buying from,'" Hanson said.