Amazon Unveils Robot Fleet To Help With Packing And Shipping 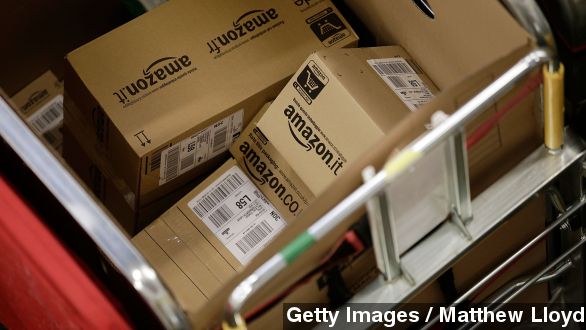 To keep up with the growing demand of the holiday season, Amazon isn't hiring a fleet of new employees; it's building them.

During last year's Cyber Monday, Amazon shipped out more than 36.8 million items. If you're wondering, that's 426 items purchased per second. And the online retail giant shows no signs of slowing down this year.

So to keep up with the growing demand of the holiday season, Amazon isn't hiring a fleet of new employees — it's building them.

There are more than 15,000 of these Kiva Robots buzzing around 10 of Amazon's warehouses all over the country.

They're produced by robotics company Kiva Systems, which Amazon bought for a whopping $775 million back in 2012.

Why the pricey acquisition? Well, as Time points out, the price of shipping the items is growing just as fast or faster than sales.

"Amazon spent nearly $8.6 billion in 2013 on fulfillment, a 34% increase from the year before; the company's total sales grew 22% in the same period."

The holiday season — more specifically, the time between Thanksgiving and Christmas — is Amazon's busiest month of the year. The Kiva robots should be a huge help to warehouse workers who have been known to walk more than 15 miles in a day finding packages in the warehouse.

Despite the new robots, Amazon says it will be hiring even more workers over the holiday season than last year — about 80,000 holiday season workers.