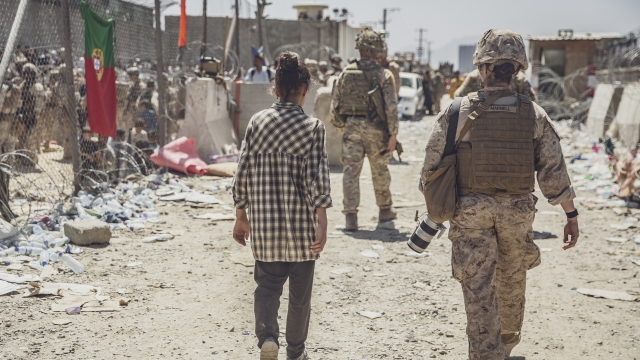 More than 123,000 civilians were evacuated in what officials have called a historic airlift.

America's longest war is over with U.S. troops out of Afghanistan.

Nearly twenty years since U.S. boots were first put on the ground and overthrew the Taliban – all but one region of the country is in Taliban control.

The head of U.S. Central Command made the announcement Monday.

"Tonight's withdrawal signifies both the end of the military component of the evacuation, but also the end of the nearly 20-year mission that began in Afghanistan shorty after September 11, 2001. It's a mission that brought Osama Bin-Laden to a just end along with many of his Al-Qaeda co-conspirators," said General Kenneth McKenzie.  "It was not a cheap mission. The cost was 2,461 service members and civilians killed and more than 20,000 who were injured. Sadly, that includes 13 U.S. service members who were killed last week by an ISIS-K suicide bomber. We honor their sacrifice today as we remember their heroic accomplishments. No words from me could possible capture the full measure of sacrifices and accomplishments of those who served – nor the emotions they're feeling at this moment. But I will say that I am proud that both my son and I have been a part of it."

More than 123,000 civilians were evacuated in what officials have called a historic airlift – a sometimes frantic effort to get people out after the Taliban's rapid takeover.

Now there are concerns about the resurgence of terrorism in Afghanistan, especially with the release of thousands of fighters from prison – and that's something the Pentagon says the Taliban will have to deal with.

"I do believe the Taliban is going to have their hands full with ISIS-K and they let a lot of those people out of prisons and now they're going to be able to reap what they sow," said Gen. McKenzie.

President Biden plans to address the nation on his decision tomorrow afternoon.

But he faces more questions about the withdrawal and how it was carried out – with Congressional hearings expected in the future to examine failures under both the Biden and Trump administrations.

In a statement, he accused the president of breaking America's word to Afghan allies and telling one lie after another.

He called the decision to leave some Americans behind morally indefensible saying, "Dishonor was the president's choice. May history never forget this cowardice."