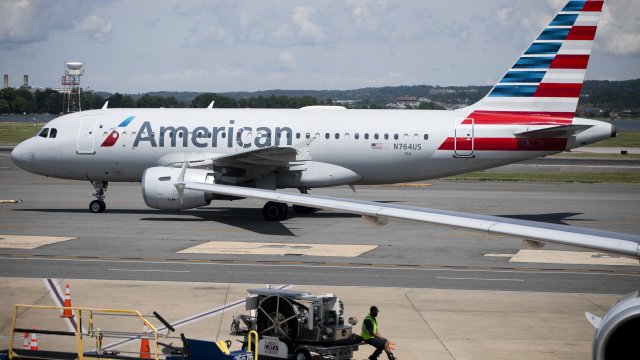 About two-thirds of Sunday's cancellations were due to a lack of flight attendants in the right places.

American Airlines canceled hundreds of flights Sunday for a third straight day as it struggled with staffing shortages and upended weekend plans for tens of thousands of travelers.

By late afternoon Sunday, American had canceled more than 900 flights — one-third of its schedule for the day — after scrapping nearly 900 flights over the previous two days, according to tracking service FlightAware.

A spokeswoman for American said the airline expects considerable improvement starting Monday, although there will be “some residual impact from the weekend.” By Sunday afternoon, American had already canceled more than 100 Monday flights, according to FlightAware.

American’s troubles began Thursday and Friday, when high winds at times shut down its busiest hub, Dallas/Fort Worth International Airport, and prevented the airline from using all runways there. That made it difficult for American to get crews in position for upcoming flights, and caused disruptions. The number of canceled and delayed flights grew larger in number and geographic sweep throughout the weekend.

“To make sure we are taking care of our customers and providing scheduling certainty for our crews, we have adjusted our operation for the last few days this month by proactively canceling some flights,” David Seymour, the airline’s chief operating officer, said in a note to employees on Saturday.

About two-thirds of Sunday's cancellations were due to a lack of flight attendants in the right places, with almost all the remaining cancellations due to a shortage of pilots, according to internal figures seen by The Associated Press.

The nature of the debacle — starting with bad weather in part of the country before spinning out of control — was similar to disruptions at Southwest Airlines in early October. Together, the twin failures raised ominous questions about whether major airlines are prepared for the busy upcoming holiday travel period.

American says it will be.

Seymour said that nearly 1,800 flight attendants will begin returning to their jobs starting Monday and at least 600 new hires will be on board by the end of the year. He said the airline is also hiring pilots and reservations agents in time for the holidays.

Airlines were barred from laying off workers during the pandemic as a condition of billions in federal pandemic relief — American temporarily furloughed 19,000 workers when the money lapsed last year, but reversed the furloughs when aid was restored. That, however, didn’t stop the airlines from persuading thousands of employees to accept cash incentives and quit voluntarily. American, Southwest and others are now hiring employees to replace some of those who left in 2020.

American's labor unions have warned for months that the airline was scheduling more flights than its pared-down work force can handle, leaving employees spread too thinly when bad weather snarls air travel.

Dennis Tajer, an American Airlines pilot and spokesman for the Allied Pilots Association, said the union had not seen such a high level of cancellations after storms had passed.

“Since the spring we have been warning of these post-weather management failures to recover, and it’s just getting worse,” he said. “We continue to be very concerned about the uncertainty surrounding the upcoming winter holiday travel season.”

American planned about 2,600 flights Sunday, not counting regional affiliates that fly as American Eagle. That number is scheduled to jump to more than 3,000 flights on eight days around Thanksgiving and early December, according to aviation-data firm Cirium.

No exact date has been set for when passengers can expect Southwest's operations to be fully back to normal.

Earlier in October, Southwest canceled well over 2,000 flights after disruptions started with weather problems in Florida and were compounded by staffing shortages. Southwest's chief operating officer said the airline was pursuing “a very aggressive hiring plan" but was "still not where we want to be with staffing,” especially pilots.