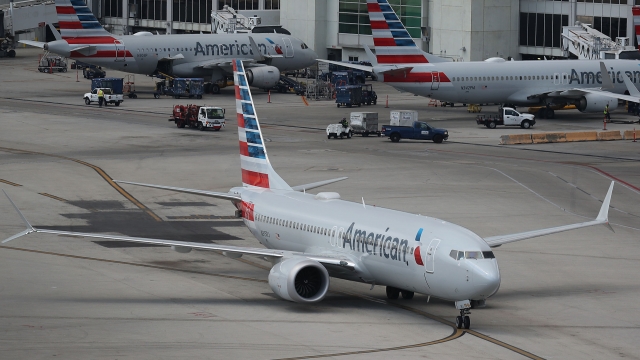 On Wednesday, the airline said its Boeing 737 Max cancellations will now extend through at least Jan. 15.

As Boeing 737 Max airplanes remain grounded across the globe, American Airlines announced it's extending flight cancellations into next year.

American has 24 737 Max planes in its fleet. Those planes, and all other 737 Max aircraft operated by U.S. airlines, were grounded indefinitely back in March after two fatal crashes involving Boeing 737 Max 8s.

American previously said it would cancel 140 flights each day through Dec. 3 to account for the temporary loss of part of its fleet. But on Wednesday, the airline said those cancellations would now extend through at least Jan. 15.

Those 140 cancellations might seem like a lot — but it actually only represents 2% of American Airlines' 6,700 daily flights. The airline noted that the majority of flights that are affected by the cancellations will still fly on schedule — American Airlines will just substitute in a different plane. Customers on flights that are canceled will be contacted directly and given options to rebook their flight. If they choose not to rebook with American, they can ask for a full refund.

Boeing's been working on a software update for its 737 Max aircraft, and it hopes to get at least some of the grounded planes back in the air in the U.S. by the end of the year.

But the FAA previously said it's not working off any sort of timetable for the aircraft's recertification process.