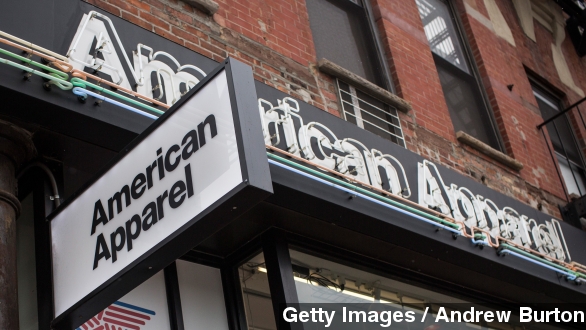 It’s been a rough holiday season for American Apparel. The cash-strapped retailer is reportedly cutting back on production and considering selling.

It hasn't been a very good holiday season for American Apparel. First there was the unseemly and expensive ouster of its founder and former CEO Dov Charney. Then a holiday discounting strategy that was less than successful left the retailer strapped for cash.

Now hedge fund Lion Capital, which has lent money to American Apparel, is urging the clothing chain to consider options including the possible sale of the company.

The Wall Street Journal was the first to report the news, noting Lion Capital made its case in a letter to American Apparel's board Sunday.

Lion Capital has warrants to purchase up to 12 percent of the company and the right to nominate two directors to its board. (Video via American Apparel)

According to the New York Post, the cash-strapped retailer plans to slow down production at its Los Angeles factories to save money, and could lead to "'sharply reduced hours and weeks off' for thousands of the company's garment workers in the coming weeks."

That would be a particularly big black eye for a company that prides itself on being sweatshop-free and manufactured in the U.S.

This news comes after a preliminary takeover bid by private-equity firm Irving Place Capital that valued the LA-based retailer at up to $1.40 per share, or around $245 million — an offer the board reportedly believes is far too low.