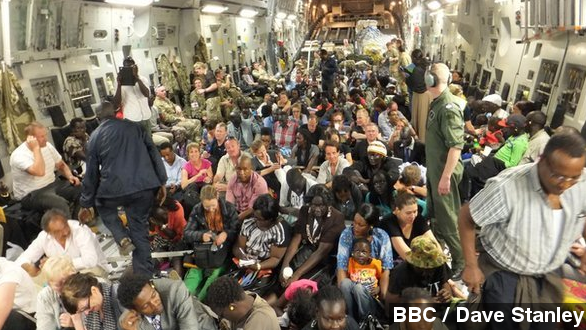 Americans caught in the middle of the conflict taking hold of the world's newest nation were safely evacuated from the town of Bor in South Sudan.

The U.S. State Department released a statement Sunday saying 15 Americans were airlifted out of the city by civilian helicopters, raising the total number of those evacuated from the country so far to 380.

A similar mission had been planned for Saturday but was aborted after three rescue aircraft came under fire. Bor has been host to some of the worst violence between the nation's military and rebel troops. (Via BBC)

Four U.S. service members were wounded in that attack. The South Sudanese government blamed the rebels, who have controlled the town since Monday. (Via Sky News)

Just a day earlier, a United Nations helicopter was shot down in the same area, destroying the vehicle but causing no reported injuries. The U.N. has been scrambling to evacuate thousands of citizens amid the growing violence. (Via CNN)

Fighting in the country began last Sunday, when South Sudan's President Salva Kiir says his former vice president tried to stage a coup. Kiir fired the VP and the rest of his cabinet back in July. (Via Voice of America)

The move sparked ethnic tensions in the country, which just gained independence from Sudan in 2011. Many fear the conflict could ignite a civil war.

The U.N. says more than 60,000 people have been injured and hundreds killed in the fighting, which so far has spread to five of the country's 10 states. (Via Al Jazeera)

President Obama and U.N. Secretary General Ban Ki-moon have called for an end to the violence. The U.N. has had to transfer resources from other countries to respond to the surge of South Sudanese civilians in need. (Via The Guardian)

President Obama urged talks between the rival factions, saying further violence could cost the fledgling country support from the U.S. and others. (Via The White House)

U.S. officials are still working to determine whether there are any more U.S. citizens left in the city of Bor. Secretary of State John Kerry says an envoy has been sent to the country to encourage peace talks.