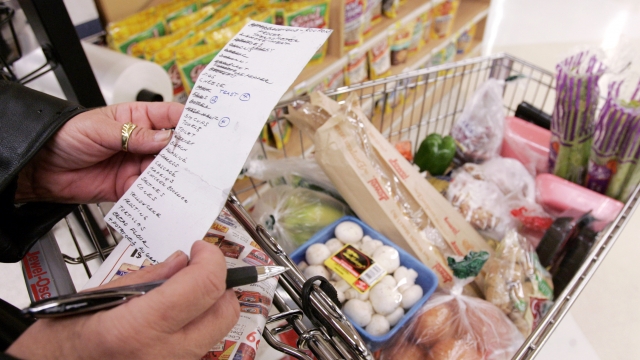 The prices of food at the grocery store have skyrocketed in recent months and some consumers say the high prices have led them to make tough decisions.

Consumers are spending much more than they used to and Oliva Yocum says she's started stockpiling food because of it.

"I've actually started pickling and cannning stuff because I think it's going to get a lot worse," she said.

Not only are people spending more, but the higher price tags are also making it harder for people to eat healthier.

"I can go get a cheeseburger and fries at McDonalds and spend about five or six bucks," he said. "I come in here [grocery store] and try to get a grilled chicken salad, but buying the chicken alone is going to cost me ten to 12 bucks."

According to the Bureau of Labor Statistics, home food prices were up 13.5% in August compared to a year earlier.

The price of bread and milk is up about 16% and 17% respectively. Eggs, on the other hand, cost nearly 40% more than last year.

Colorado farmer Eric Hanagan says the increasing cost of fertilizer — which hit a record high this year and at one point more than doubled in price — is one of the many reasons driving prices up.

"Our revenues are way, way down," Hanagan said. "We're running 50% of our sales because farmers are affected by the drought, fertilizer and fuel prices."

Those price increases trickle down to the consumer and the USDA expects grocery store food prices to increase by up to 11% this year — with meat being the primary driver.

"It's kind of sad that you're better off financially buying greasy hamburger meat and fries rather than buying the salad and fruit for your kids," Garrett said.