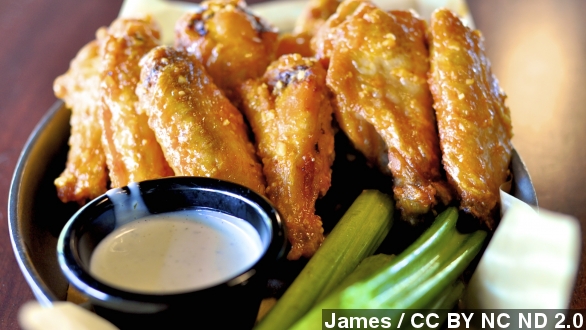 America is about to consume an absolutely ridiculous amount of chicken wings.

But consuming that much chicken will be pricey because ... well, there are only so many chickens.

Last year chicken breeders had an issue with roosters being too fat to breed, leading to a reduction in chickens raised for slaughter this year.

The smaller supply of chicken combined with the incredible demand surrounding the Super Bowl has caused the price of wings to jump 6.6 percent just this month to $1.69 a pound.

But there is some good news for wing lovers. Bloomberg reports farmers have been giving their chickens extra feed to compensate for some of the shortage, so your Super Bowl wings will probably be pretty meaty.

And you'll spend even more on wings if you're going out to watch the game.

Buffalo Wild Wings already raised its wing prices by 3 percent because of the increased cost of chicken.

And one New York restaurant takes the cake when it comes to expensive wings.

An order of Old Homestead Steakhouse's caviar covered Super Bowl wings costs $4,900. Though this is more about refined taste than a supply shortage.